The Air Force announced Friday that it is taking a “critical step” towards a new internet-of-things for war by installing communications pods into certain air tankers and fast jets.

The pods act like Wi-Fi hotspots, allowing the aircraft to relay large streams of data without having to land. The technology will initially be used with F-22 Raptor and F-35 Lightning II fighter jets, and also with KC-46 Pegasus tankers.

“A critical step in the progress of any military program…is the establishment of the manpower, resources and doctrinal infrastructure that underpin the program,” the Air Force said in a statement announcing the new technology trial.

The trial is part of the Air Force’s Advanced Battle Management System (ABMS), which aims to connect everything in and around a battlefield and then to use artificial intelligence to make sense of the data.

ABMS is the Air Force’s part of the broader Joint All Domain Command and Control (JADC2) strategy. JADC2 is the Department of Defense’s plan to connect sensors from all US military services into a single network which, theoretically, could be more effective and less costly.

The new communication pods are some of the first physical pieces of ABMS tech reaching the field, but the Air Force is previewing new digital components coming online soon. The backbone of much of the program will be data libraries and new digital infrastructure that will store and transmit data between any platform in a battle, Air Force leaders have said. 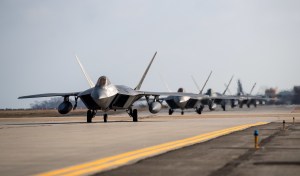