The Air Force made awards Wednesday totaling $121.7 million to kick off experiments for its Enterprise IT-as-a-Service (EITaaS) transformation program.

The EITaaS program is meant to outsource basic commodity IT operations to commercial providers so that the Air Force can free up airmen for more specialized, cyber-focused network defense and mission assurance.

AT&T won the first of the two awards worth $87.4 million through an other transaction agreement (OTA), according to a Department of Defense award announcement. Microsoft received the second, another OTA worth $34.4 million.

Through the OTAs — which are “prototype projects designed to accelerate technology evolution from concept to experimentation and development with the goal of placing capabilities in the hands of warfighters,” according to the Defense Innovation Unit — the two providers will focus on the network-as-a-service portion of the EITaaS transformation. Specifically, they call for “experimentation of a secure, reliable, measured, commercial data and voice network in order to enable access to Department of Defense data and applications from DoD facilities, as well as enable access for mobile and remotely located users.”

Ultimately, the EITaaS project is meant to help make the Air Force’s IT and workforce more efficient.

“We want our airmen transitioning from running email and boxes to focusing on cyberdefense,”  Bill Marion, the Air Force’s acting CIO, said earlier this year. “Every time we move to the cloud, the intent is to free up cyber-operators for the Mission Defense Teams.”

He continued: “The strategic intent is to focus on our core competency. Our core competency is ‘fly, fight, win’ in air and space. It is not to run email servers or configure desktop devices.” 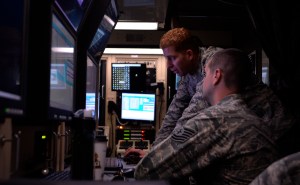