The Air Force‘s platform to upskill its workforce got some major new additions, with new career pathways and course designs to organize users’ learnings around specific technical skill sets.

The Digital University platform’s initial launch in summer opened up thousands of lessons from contractors Udemy, Pluralsight and Udacity without much direction for the learner. The latest updates push the platform closer to what many companies in the private sector have embraced to keep their workforces sharp on the latest technology skills, with specific career paths and customizable tracks for particular skills.

“Technical training typically isn’t done well in the Air Force, so there is a demand to upskill our technical airmen for the jobs we need. DU was built to be that central hub,” said 1st Lt. Peyton Cleveland, who built much of the backend of the new course paths.

Digital University is managed by the Air Force’s Business and Enterprise Systems Product Innovation office (BESPIN). The team told FedScoop in September that it plans to “constantly [update] digital training” on the DU platform, made evident by the new pathways and customization available in the latest release.

“The goal was to completely transform the way we think about digital training,” Cleveland said about DU.

The first Digital University users were cybersecurity specialists and technical professionals looking to stay up-to-date on the latest coding techniques — the type of tech professionals who might already know what lessons to look for in the library. From there, DU leaders hope to expand the user base to curious airmen and Space Force guardians who recognize the benefits of technical skills in their roles but would need more guidance on where to begin — hence the newly coded career paths.

Some hope that senior leaders will also jump on the platform, just like Chief of Space Operations Gen. Jay Raymond said he has done. Raymond also said previously that digital literacy will be a requirement for new Space Force members, who can take Digital U coursework and other tech training to develop new skills.

So far, the platform seems to have taken hold, DU officials say.

“A lot of the feedback has been really positive,” Cleveland told FedScoop. “People love what we are doing and want more of it.” Even the Army is jumping onboard with a pilot of the platform, Cleveland said.

Digital University has been praised by Air Force and technology leaders as a way to help turn the greater Department of Defense into a more-digital organization. With the decades it takes for young, tech-native people to rise through the ranks of the military, Digital University’s leaders hope the program can start to turn those already in senior roles into leaders who recognize the value of digital skills in the modern military. 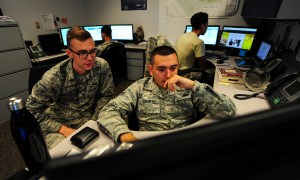