With more than 34 years of service under his belt, Lt. Gen. Bruce Crawford retired Tuesday as CIO/G-6 of the Army.

During a ceremony at Joint Base Meyer-Henderson Hall, Army leaders celebrated Crawford’s leadership driving modernization across the branch’s IT enterprise and thanked the Crawford family for their service to the nation.

Army Chief of Staff Gen. James McConville in a speech credited Crawford for having “fundamentally changed the Army’s strategy for enterprise IT modernization,” including leading the recent delivery of service’s enterprise data strategy and the development of an enterprise cloud environment.

“When Bruce was the G-6 and I was the vice [chief of staff], we worked closely on modernizing the Army’s network, which pretty much meant Bruce setting the conditions and designing what the Army would look like in the Information Age, and the rest of us getting out of his way and giving him the resources he needed to get it done,” McConville said. “Bruce has been one of the most pivotal leaders of our time, leading the Army through a transformation from the Industrial Age to the Information Age.”

With Crawford’s retirement, the Army will undertake a major shift in the structuring of its IT office. The service announced in June it would split the CIO/G-6 role between a civilian CIO serving as the chief IT adviser to the secretary of the Army and a three-star general in charge of policy implementation and working closely with uniformed staff.

The service nominated Maj. Gen. John Morrison to lead in the uniformed role as deputy chief of staff of the G-6 in mid-July. He was confirmed July 30 along with earning his third star.

On the civilian side, Deputy CIO Greg Garcia will serve as acting CIO until the Army appoints someone into that new role, which it expects to do in the coming months, an Army spokesperson told FedScoop.

“Their assumption of responsibility over the separate entities of the CIO and the G6 begins the next phase of the Army’s focus on modernizing the networks, data, and cloud operations,” the spokesperson said.

“Much work remains to be done, but we’ve put the Army in a place to … move it rapidly over the next three to four years” in modernizing, Crawford said in his final remarks.

Crawford was recently named a Best Boss in Federal IT and is a past recipient of a FedScoop 50 award. 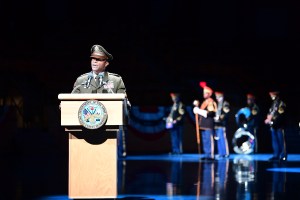