Over the past year, Army Lt. Gen. CIO Bruce Crawford has dedicated himself to the service’s priority of modernizing the network, addressing things like why it’s necessary and what must be done to bring the force into the 21st century. Now, he said Thursday, it’s time to figure out the “how.”

“I think probably the most important thing you can expect from the Army is a clear-eyed and sober dialogue with you and in collaboration on the ‘how,'” Crawford said at an Association of the U.S. Army symposium.

From there, he dug into exactly what he means:

“How do we intend to shape the force, aligning the force to capitalize on the technological advancements, while educating, developing and … retaining the best and brightest talent? How do we intend to build on what we’ve learned over the last 15 months — intense deep dives on the network, from the tactical level all the way to the enterprise, to build on what we’ve learned to provide a simple and intuitive network that is available, reliable, resilient and operates as a weapons system?”

Crawford continued: “How do we intend to get after the institutional reform that’s going to be required, adapting policies, some of the things I consider to be prohibitive policies in some way, form or fashion, like the risk management framework, and adapting those policies to the warfighter’s current needs instead of forcing the warfighter to adapt to legacy, prohibitive policy? And last but not least, how do we intend to drive institutional change to promote sustained modernization that will enable the Army to adapt in response to the ever-changing environment?”

The Army is in the midst of “the largest modernization of our networks in the last 35 years,” Crawford said, acknowledging that “that’s a bold statement given the fact that we are still, today, the best-equipped and most lethal force on the earth in terms of our militaries.”

The service delivered its network modernization strategy to Congress earlier this year, to which Crawford said Thursday, “We have a long ways to go in terms of achieving the vision of a modernized network.” But, he added, “Our leadership over the past 90 days has charted a great course.”

“The last time the Army took on a task of this magnitude, we were just beginning to realize, to really internalize the power of the internet,” he said. “Software-defined capabilities, which are everywhere today, had not been proliferated throughout the battlefield.”

In general, Crawford explained, there’s been a shift in how the Army addresses technology, from static and reactionary to forward-thinking.

“Probably the greatest lesson learned has been the fact that for the past 15, 16 years, I’m not sure because of where we were focused that as an institution … we figuratively had our sensors in the right place” to understand the evolutions in technology in the private sector, he said. “So, absent having our sensors in the right places, figuratively, what did we do? We bought stuff. We reacted to technology, especially at the tactical level. And we reacted at an alarming pace because of the resources that we had available to us.”

But now, he said, “Fundamentally, as I look back on the last year, your Army is institutionally in a different place than it was just one year ago.”

Included in the evolution of the network is the intent to harness the avalanche of data the Army has at its fingertips with emerging technologies, like the enterprise cloud, artificial intelligence and advanced identity management — what Crawford called “data-driven technologies.” The Army is following the Defense Department’s lead on these topics, he explained, staying tuned in on the developments of the Joint Enterprise Defense Infrastructure commercial cloud contract and the Joint AI Center.

“It’s all about the data,” Crawford said. “Any attempt to modernize this thing called the network must consider these factors, and the key factor being the data.” 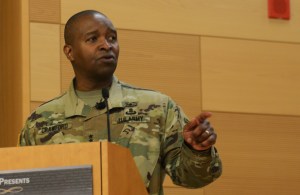 Army CIO Crawford has one question on network modernization: How?