The Army will use the remainder of fiscal 2020 to build “foundational elements” for its cloud architecture and data management, some of its top IT officials said Monday.

The service is in the midst of migrating its data from disparate legacy systems to the cloud. But first, it must prepare a standardized foundation of data from across the service so that it is unified once it arrives in the cloud.

“We don’t want to build a house on sand,” said Paul Puckett, the head of the Army’s newly formed Enterprise Cloud Management Office.

First, the Army will focus on unclassified data and migrating it to the cloud, followed increasingly by secret and top-secret information.

It’s a process rife with challenges, but the biggest is culture, Puckett said Monday at the Army Data and Cloud Colloquium.

As the Army moves to the cloud, the service is bringing weak data management practices and systems with it, Puckett said. “We just have a whole bunch of people that picked up their stovepipes and dropped it in the cloud,” he said, adding that one of his biggest priorities is “consolidating all the footprints” of data.

Better data infrastructure will pave the way for a multi-cloud environment that will ultimately support modernized command and control, or C2, for communication on the battlefield, said Army CIO Lt. Gen. Bruce Crawford. The next generation of C2, he said, will be built through cloud services that allow data from sensors on the battlefield to be connected to generals at the Pentagon and beyond.

But to get there, a stronger foundation will need to be built. “Data is the ammunition of the future fight,” Crawford said.

Crawford said the Army plans to spend more than $700 million on cloud technology in the future and Puckett’s office will be fully stood up by March to support that new environment.

That money came from so-called “night court” where the Army took money from out-of-date uses to reinvest in modernization and readiness. But all of the spending relies on cultural changes that will allow for better data management, Crawford said.

Clean and accurate datasets will be critical to the future of warfare and help reach another major objective for the military: artificial intelligence. AI feeds off of massive datasets that allow its advanced algorithm to pick up patterns and speed up decision-making.

The Army generates enough data to train AI, but as of yet doesn’t have it stored in a way to use it to develop the emerging technology.

“The hardest part about AI is not AI, it is data,” Priya Raman, chief data officer at Microsoft, said at the event.

The Sectary of the Army has said that AI is a top priority for the service, and the Army AI Task Force is already announcing achievements. But without data management, AI will remain in the distant future, Puckett said.

The Army is not alone — other services too have yet to achieve scaled use of the technology. AI is still a “bright shiny object” that is out of reach for large scale development and use, Bill Marion, deputy CIO of the Air Force, said at the event. Marion projects large-scale use of AI in a decade, adding that some AI uses are already coming online. 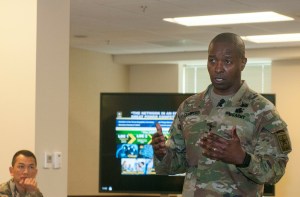 Army IT leadership calls 2020 ‘foundational’ for cloud and data