Integrating and modernizing the Air Force‘s communications systems to connect warfighters is critical to national defense, experts said at a Brookings event Friday.

The military’s command and control (C2) systems will need to use integrated communications networks across air, land, sea, cyber and space to meet future challenges, said members of a panel on Air Force modernization.

Success in Great-Power conflict “all depends on C2,” said Thomas Ehrhard, a former airman and vice president for defense strategy at the Long Term Strategy Group.

Command and control is not a “sexy” topic for a force that measures speed against that of sound and controls nuclear weapons, but it is a critical part of modernization, Ehrhard said. “China is focused on attacking western C2,” he added.

The Air Force and the Pentagon writ large already have an acronym for streamlining communications cross the military branches and their many domains: JADC2, for Joint All-Domain Command and Control.

Rebecca Grant, president of IRIS Independent Research, added an enlarging prefix, calling it “global JADC2.” With such a large surface area to account for, artificial intelligence could play a major role in expanding C2 networks by automating parts of the system that will carry large data flows from sensors across domains, Grant said. The race for AI is critical and already an important part of the Air Force, she added.

“Airmen would tell you they already have a lot” of automated systems running in fighter planes, she said. But when it comes to adding AI and modernizing the communications network, Grant said she is “disappointed we have not seen more details.”

A central part of China’s military strategy is “leapfrogging” U.S. technology by investing heavily in AI. While Ehrhard said AI is “hyped,” he said it still needs to be a priority for the Air Force to maintain a technical edge over China and other competitors.

“It is not the apocalypse, but a thing we need to win,” he said. 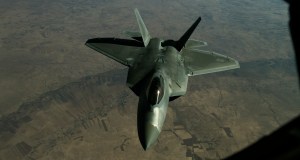