The Army is expecting test events for its flagship artificial intelligence project to involve at least 5,000 military and civilian personnel during 2021.

Speaking on a panel at the Association of the U.S. Army’s annual meeting in Washington, D.C., Deputy Commanding General of Army Futures Command Lt. Gen. James Richardson revealed the estimated scope of staffing for Project Convergence, and said assigned staff were “working as a team.”

This year’s tests are taking place during October and November, and the principal, multi-day test event is slated for mid-November. They will involve other branches of the U.S. military, and take place at eight different locations synchronized through new virtual networks. A total of 74 private sector companies are contributing technology and services.

Project Convergence is the Army’s contribution to the Joint All Domain Command and Control (JADC2) framework. It is the military’s vision for using networks to pull data from a battle and be able to quickly use it to generate insights and inform decisions with advanced technology, including artificial intelligence.

Speaking at the AUSA meeting, Richardson added that this year’s test will stress test technology in environments with limited bandwidth and constant interference from potential adversaries, which the Army typically encounters in combat zones.

Ensuring technology can operate in challenging environments is a top priority for technology leaders across the Department of Defense (DOD). Late last month DOD Chief Technology Officer Heidi Shyu said the department should look to the gaming industry for assistance with developing virtual reality and augmented reality systems that are capable of working in hostile environments.

Earlier this month, the Department of Defense’s watchdog found that the Army’s Project Convergence lacks plans for how technology would handle adversarial cyberattacks. 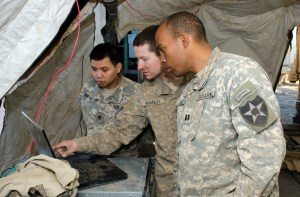