The Army has signed a $1.4 billion contract with Northrop Grumman for tech that will integrate its missile defense systems.

The contract for the Integrated Battle Command System is designed to link battle command systems and sensors to better detect and respond to incoming threats. It’s a part of the “integrated fires capability” that is central to the Army’s implementation of the Joint All Domain Command and Control (JADC2) construct, where the military is trying to build a battlefield internet-of-things with connected sensors.

“[Integrated Battle Command System] is a keystone Army Futures Command program that will provide a decisive battlefield advantage through weapon and sensor integration and a common mission-command system across all domains, delivering an integrated fires capability to the warfighter while improving battle space awareness, decision timing and protection against threats in complex integrated attack scenarios,” the Army said in a statement about the contract.

This is the first major award for Integrated Battle Command System since 2009, according to the Army. The contract is a hybrid, with cost-no-fee, cost-plus-fixed-fee, cost-plus-incentive-fee and fixed-price-incentive vehicles, and work will last over the next five years. It was awarded by the Integrated Fires Mission Command (IFMC) Project Office, a part of the Army’s Missiles and Space Program Executive Office.

Northrop Grumman will deliver up to 160 systems to support modernization of the air and missile defense system, according to the Army.

In a statement to FedScoop, Mary Petryszyn, corporate vice president and president, Northrop Grumman Defense Systems called the contract “a major milestone in the extension of our open systems architecture approach to JADC2.” 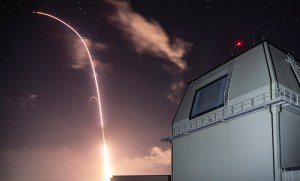