The Army has launched its first app that allows soldiers to access personnel records without the need for a Common Access Card.

Called the Integrated Personnel and Pay System-Army (IPPS-A), the app is available on Apple’s App Store and is expected to have roughly 1 million users among active-duty personnel and members of the Army National Guard and Reserve by December when the third update of the app.

It will serve as a modern hub for the Army’s human resources system, allowing users to send in help requests on personnel matters, updating records and monitoring personnel actions.

“The IPPS-A mobile app is a force-multiplier. Access and situational awareness of personnel transactions will be delivered at your fingertips, giving the total Army more transparency than ever before,” said Col. Gregory Johnson, IPPS-A functional management division chief.

It’s the first paperless app where soldiers can connect to Army HR systems and avoid a trip into a personnel office. It will also be available from the Google Play store. Android users can also download the app through the Army Training and Doctrine Command App Gateway.

The app claims to have “the same level of sophistication and security that secure banking and personal service apps have today,” according to its website.

The Federal Procurement Data System shows several companies having contracts for work related to the app, including Booz Allen Hamilton, ASM research, IBM and others. 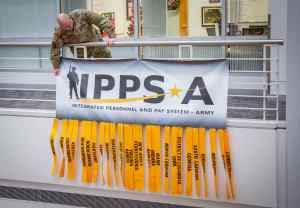