ABERDEEN PROVING GROUND, Md. — The Army gained important feedback for the continued incremental build-out of its tactical communications network during the first phase of an operations demonstration in Europe.

The Army has adopted a multiyear strategy involving the incremental development and delivery of new capabilities to its integrated tactical network, involving a combination of program-of-record systems and commercial off-the-shelf tools. Those “capability sets” now provide technologies to units every two years, each building upon the previous delivery. Capability Set 21 was primarily designed for infantry brigades; Capability Set 23 is focused on Stryker brigades, and Capability Set 25 is focused on armored brigades.

Capability Set 23 passed critical design review in April, essentially locking in a set of technologies. Early in the capability set process, the Army experiments with a wide range of kits and systems as a means of gauging which combination of tools are the most effective.

Following that critical design review, the next step towards procurement and eventually fielding is beginning a series of operational demonstrations to ensure the kit works with soldiers’ platforms and the tactics they use to fight.

“The goal is really to make sure that the kit that we have designed for Cap Set 23 will actually work in an operational context and it supports and meets the soldiers’ needs in that operational context,” Matt Maier, project manager for interoperability, integration and services at Program Executive Office Command, Control, Communications-Tactical, told reporters June 23. “The idea is to gather that feedback and see if there’s any additional design changes that we need.”

Phase 1 of the operations demonstration — which included troop and battalion-level life fires — is smaller in scale than what’s planned for phase 2 early next year.

Personnel from the program executive office weren’t exactly concerned with stressing the network, which will come at later Army demonstrations. Rather, they were focused on taking the hardware and software that was locked in from critical design reviews and integrating them to ensure they are configured properly with the equipment from 3rd Squadron, 2nd Cavalry Regiment.

The feedback they garner from events like this helps them continue to make tweaks to the network equipment and kit they will ultimately deliver to soldiers ahead of the fielding decision.

“It’s possible that the feedback is, there’s some things they’d like to change about the network and it’s probably not, ‘I don’t want this kit.’ It’s probably things like, ‘We could use a configuration update of this software, or maybe if you can make the cable runs a little longer, or the power train, you could get a little bit more power on the vehicle,’” Maier said. “Those kinds of things are the feedback that we’re looking for now. We’re refining the design of all the critical capabilities going into Cap Set 23.”

One key issue discovered was power constraints associated with the Stryker vehicles. The unit said there wasn’t enough power on the platform with the added network equipment, meaning they couldn’t do certain things in their required mission set.

“That’s just like one example of something that we’re learning from this small exercise and addressing it now so that way, when the unit has the full kit fielded and ready to go for their [combat training center] exercise, that they’re good,” Lt. Col. Jonathan Judy, product manager for capability set development at PEO C3T, said.

They’ll begin working with Program Executive Office Ground Combat Systems on a potential fix for this, with officials noting there might already be a fix in the works given the Strykers that participated in the demonstration are older variants and newer ones might not be as constrained when it comes to size, wight and power.

Officials said this approach validates the incremental strategy developed at the outset of the integrated tactical network in 2018, especially as they have to work across other program executive offices to ensure the network equipment fits into the contours of the various ground vehicles such as Strykers or tanks.

Events and feedback like this also have reverberations beyond just the Capability Set 23 build. Officials said they are taking some of the lessons from platform integration with Strykers and applying it forward to the Capability Set 25 process, which is focused on armored formations as they continue to design it.

Given the first capability set in 2021 was focused on light infantry dismounted units, this is the first time the Army is working with platform and mounted integration.

The Army must take into consideration how these units fight with their platforms as they’re working with them and the other program executive offices to integrate equipment.

For armored units, “their vehicles are much more constrained than the Strykers,” Mindy Gabbert, project lead for the integrated tactical network with in project manager tactical radios at C3T, said. That situation is “more than likely going to drive us towards slightly different materiel solutions that are just lighter, faster, maybe similarly capable, but really looking at what features are absolutely needed in those vehicles and giving them something that’s going to both fit in the vehicle and fit within the power constraints,” Gabbert said.

“They have slightly different mission sets. The Strykers, they’re in their vehicles and then they dismount their vehicles to fight, and so that’s a critical part of the way that they run their missions. The armor [units], they stay in the vehicle, so they just need slightly different sets of capability among each of the formations. There’s really no one size fits all for every different formation out there,” she added.

This first phase also acts as a risk-reduction effort to address concerns ahead of larger exercises such as phase 2 or combat training center rotations.

“If there are some issues that we’re seeing that we need to address now or that we start working towards so that as the next brigades get fielded, the cap set that we’ve worked out some of those issues,” Judy said. “We may get two to three battalion-sized elements in this field exercise, which is good … One of the challenges that we always have is actually operational test to scale because it’s hard to get an entire brigade out in the field at one time with the entire kit doing exercises to see actually how the network performs.”

In addition to seeing if the gear is useful in an actual operational context, the Army is also looking to improve the way it tests and instruments tools.

“The other thing that’s really important for us is making sure that the phase 2 of the operations demonstration is instrumented. We want to make sure that we have good qualitative … [and] quantitative instrumented data to be able to analyze that’s going to help us make a good fielding decision based off what we see coming out of that exercise,” Judy said.

This includes figuring out where to put taps into the network to measure traffic and bandwidth as well as testing cyber and electronic warfare vulnerabilities. 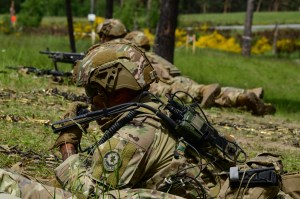