The Army is getting a new top official in charge of modernizing its tactical network.

In a tweet, the service announced that Maj. Gen. Anthony Potts will assume duties as Program Executive Officer for Command, Control, Communications-Tactical, the team responsible for developing, fielding and managing the Army’s tactical network.

Potts takes over for Maj. Gen. Robert Collins, who will head to the Pentagon as deputy of acquisition and systems management for the assistant secretary of the Army’s acquisition, logistics & technology unit.

Potts comes to the job from PEO Soldier, which has played a significant role in helping the Army modernize its tactical network, namely by providing tablet-like devices that track soldiers’ movements on the battlefield, providing a level of unprecedented situational awareness.

PEO C3T has been on a multiyear path to modernize the Army’s tactical network for multidomain operations against sophisticated adversaries.

The Army has adopted an incremental, multiyear strategy to modernize its network and deliver new capabilities to soldiers. The service plans to field new “capability sets” with upgraded technologies every two years, each one building on the last. Capability Set ’21 is focused on infantry brigades, with Capability Set ’23 focusing on Stryker brigades and Capability Set ‘25 focused on armored brigades.

In the new role, Potts will be responsible for picking up the baton for developing and delivering these capability sets.

In fiscal 2021, the Army delivered four infantry brigades with initial kits as part of Capability Set ’21 with three more being fielded in fiscal 2022 along with a Stryker brigade.

The Army is already working on design goals for armored brigades, recently concluding a pilot effort at Fort Stewart testing a variety of technologies to enable communications on the move.

There is currently no timeline for when Potts will assume the new role. 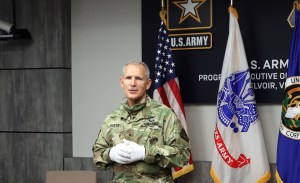