The newly sworn-in Secretary of the Army Christine Wormuth has said that modernization programs remain “a top priority” in her first message to service personnel.

“The army must be manned, trained, equipped and modernized to be ready to fight today, but also to meet the demands of an uncertain and unpredictable future,” Wormuth wrote in a memo sent on June 1. “Seeing our modernization programs through successfully will remain a top priority so that the Army is ready to meet future challenges.”

The secretary wrote to service members after last week being sworn in as the first woman to lead the Army. She has previously held several senior DOD positions, including the undersecretary for policy.

At her confirmation hearing, Wormuth told Congress she backed the Army’s plans to create a force that can fight in “multi-domain operations,” where soldiers would be able to link together operations via tactical networks and data transfers that would better inform how they can coordinate actions.

The largest multi-domain project the Army is working on is its Project Convergence. It is the Army’s contribution to the over all Joint All Domain Command and Control (JADC2), which is intended to bring multi-domain and multi-service operations to the entire military.

The department established Army Futures Command in July 2018, which is tasked with leading modernization programs. 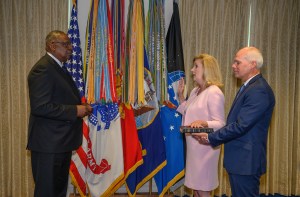