President Joe Biden on Wednesday announced his nomination of Shalanda Young to be director of the Office of Management and Budget.

Young is currently the deputy director of budget for OMB and since her confirmation in March has also served as acting director of the department. The permanent OMB director post has so far gone unfilled during Biden’s presidency.

“In her eight months as acting director of OMB, she’s continued to impress me and congressional leaders as well,” Biden said in a video announcing Young’s nomination. “Shalanda will not only be a tremendously qualified director; she’ll also be a historic director — the first black woman to hold the post.”

As director of OMB, Young would oversee some of the federal government’s most crucial IT management operations housed in the Office of E-Government and Information Technology, led by Federal CIO Clare Martorana. Her nomination also comes on the heels of the recent release of the President’s Management Agenda, which places a strong emphasis on the use of IT and data to achieve the administration’s larger management goals.

Neera Tanden was Biden’s original choice to head OMB, but she stepped away from the nomination when it became unlikely she would be confirmed in the role after old-but-since-deleted tweets critical of some lawmakers resurfaced, leading to opposition from Republicans in the Senate.

Prior to joining Biden’s OMB, Young served as a staffer for the House Committee on Appropriations for more than a decade. She got her start in government as a Presidential Management Fellow at the National Institutes of Health.

Biden Wednesday also nominated Nani Coloretti to take Young’s vacated role as deputy director of budget. Coloretti was deputy secretary of the Department of Housing and Urban Development during the second term of the Obama administration. Since then, she’s been senior vice president for financial and business strategy at the Urban Institute.

Coloretti, like Young, was also a Presidential Management Fellow, but she got her start in the federal government at OMB. Biden called her return to the agency a “homecoming.”

As both women have been Senate-confirmed to senior leadership roles in the federal government, Biden urged the Senate to once again confirm them “so they can lead OMB at this important time.” 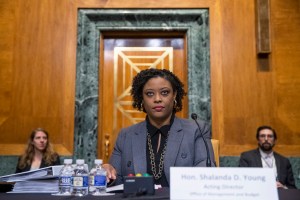