Bill Marion, the longtime Air Force IT and cybersecurity official and current deputy CIO, will leave the service after a 28-year career in which he started as an intern.

Marion told FedScoop he will depart at the end of April to move home to Austin, Texas, and take a role in industry. Marion couldn’t yet reveal his next role but said it will be closely tied to digital transformation, “but on the other side of the wall, if you will.”

“I came in as an intern almost 20 years ago — so at the lowest level of the Air Force to the senior civilian in the cyber community,” Marion told FedScoop. “So it’s been a crazy ride from that perspective. And I couldn’t be more thankful and proud of an Air Force career.”

He’s took over as the deputy CIO of the Air Force in 2016. Since a 2018 restructuring, in that role, he’s been the senior-most civilian IT official in the Air Force, reporting to the undersecretary who performs the budgetary duties of the CIO role.

Marion will leave the Air Force at a time when the service is strategically investing in its IT infrastructure and building a culture that emphasizes digital literacy and capabilities in all of its airmen. He said he is confident in the vision of the Air Force senior leadership and whoever fills his absence will have the top-level support to succeed.

Marion, a recipient of multiple FedScoop 50 awards, has most notably dedicated his time in the recent years to developing the Air Force’s Enterprise IT-as-a-Service efforts, driving a digital transformation of the greater Air Force workforce and aligning the service’s IT programs to the vision for Joint All-Domain Operations.

“We’ve got a [chief of staff] and secretary that are truly driving and understand the need for a digital Air Force, Joint All-Domain Operations,” Marion told FedScoop. “And they’re investing and we’re organizing and we’re delivering on that vision.” 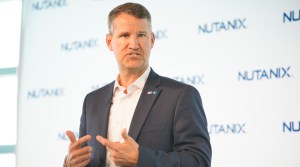