The Consolidated Appropriations Act of 2023 includes $50 million for the Technology Modernization Fund to support federal agency IT modernization projects.

The sum, which was included in final bill language signed into law by President Biden on Dec. 29, represents a compromise figure after the Senate’s version zeroed out extra support for the General Services Administration-administered fund.

Earlier this month, technology trade group the Alliance for Digital Innovation called on lawmakers to provide at least $100 million for the TMF, while the Biden administration in March sought $300 million for the fund.

In addition to providing further support for the TMF, the enacted omnibus legislation appropriates funding for a range of agency-specific software and technology modernization programs.

The Department of Justice will receive $138 million for the development and deployment of information-sharing technology, of which $40 million may be allocated by the attorney general for other enterprise-wide information technology initiatives.

It also directs the secretary of Health and Human Services to award grants for eligible parties to develop and expand access to digital peer-supported mental health services.

Meanwhile, according to the legislation, the Treasury Department will also receive $11.1 million for the development and acquisition of data processing equipment, software and services used for the repair of department-owned buildings.

The act also directs the comptroller of the United States no later than one year after the enactment of the legislation to publish a report identifying challenges in cybersecurity for government devices, including legacy devices that may not support certain software security updates.

Federal agencies have turned to the Technology Modernization Fund for IT modernization support after it received a $1 billion infusion as part of the American Rescue Plan, which was signed into law by President Biden in March 2021.

The fund works to fast-track federal agency technology modernization by flooding select projects with additional funding and expertise to help achieve goals within a shorter timeframe.

Since it received $1 billion under the American Rescue Plan, the fund has drawn more than 150 proposals from 70 agencies for $2.8 billion in funding.

The TMF Board in June said $100 million of those funds would be dedicated to improving customer experience across public-facing digital services and systems and addressing immediate service gaps starting in fiscal 2023. 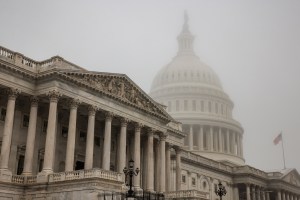