Editor’s Note: This story has been updated with new information on the cause of the outage.

On one of the busiest travel days of the year as many returned home from their holiday travels, the outage caused “longer than usual” wait times for those entering the U.S., ranging from 30 minutes to two hours in some airports. Officers processed travelers “as quickly as possible while maintaining the highest levels of security,” a CBP spokesperson said.

“During the technology disruption, CBP had access to national security-related databases and all travelers were screened according to security standards,” CBP spokesman Jim Burns told FedScoop in a statement. “At this time, there is no indication the service disruption was malicious in nature.”

When such an outage occurs, CBP officers must use slower backup systems to process international travelers through customs.

CBP personnel are still conducting diagnostics to find out what went wrong. 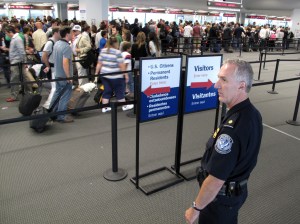 Customs outage from software update disrupts travel into the U.S.