The Defense Advanced Research Projects Agency (DARPA) has selected three companies to work on a research program that could dramatically lower the amount of bandwidth used by networks of cameras.

The program, which is called Fast Event-based Neuromorphic Camera and Electronics (FENCE), aims to develop cameras that sense motion, but which are able also to determine what motion is important and represents a threat. According to the agency, the new technology could reduce latency and the usage of network capacity by transmitting only necessary information.

Raytheon, BAE Systems and Northrup Grumman are the three defense contractors that have been chosen to work on the research project.

Neuromorphic computer systems refers to silicon circuits that mimic brains. Other research arms of the military have been on the hunt for neuromorphic computing systems that multiply the power that conventional AI systems have to churn through data.

Cameras that are able to operate with less bandwidth and lower latency are especially important to the U.S. military, because they must operate in theaters of war, where networks are often unreliable.

“The goal is to develop a ‘smart’ sensor that can intelligently reduce the amount of information that is transmitted from the camera, narrowing down the data for consideration to only the most relevant pixels,” Whitney Mason, the program manager leading the FENCE program said in a news release.

Cameras can already do some of this type of work in scenes that have few changes in the camera’s field of vision, but their capabilities become less reliable in complex or cluttered scenes. 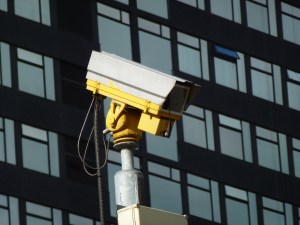