The Defense Advanced Research Project Agency (DARPA) recently launched a project to improve the common operating picture of a battle taking place across domains, like a fight occurring in both air and land.

The program, Air Space Total Awareness for Rapid Tactical Execution (ASTARTE), was announced earlier in April and is looking for advanced low-cost sensors, artificial intelligence algorithms and virtual testing environments to create a better common operating picture when troops are spread out across domains of warfare.

ASTARTE will aim to “complement” Joint All Domain Command and Control (JADC2), the military’s futuristic network-of-networks botnet being developed by the Air Force, by better integrating the command and control of multi-domain operations with a more accurate picture of the enemy forces in battle.

“We want to provide a more accurate and timely picture of the airspace that will allow for long-range fire missions as well as manned and unmanned aircraft operations to occur simultaneously and more safely in the same airspace,” Paul Zablocky, program manager in DARPA’s Strategic Technology Office, said in a news release.

ASTARTE will need to work in the most difficult airspace, the space above an Army division clogged with friendly and enemy aerial forces along with signal jamming and other communication-denial systems. To meet these challenges, instead of making a set hardware-software combination for military forces to acquire, the program aims to develop three evolving technical areas: algorithms, sensors and virtual testing environments. The key to the AI algorithms will be integrating with common operating picture hardware and command and control systems already in use and ones of the future, like JADC2.

DARPA is looking to upgrade the sensors used to detect aircraft and munitions. The key to the sensors will be having them be low-cost, be able to operate in difficult environments and run a network that can sense everything from small drones to incoming missiles. The third area of work will be building a testing environment to ensure the sensors will work and the algorithms process data effectively, according to the broad agency announcement.

“This is an excellent opportunity for proposers to create diverse teams built with academic partners and other traditional/non-traditional DoD partners with highly specialized technical expertise,” Zablocky said. “There are numerous civilian and commercial technologies such as gaming, virtualization, and artificial intelligence that could also provide unique insights and capabilities to a defense contractor team proposing to this effort.” 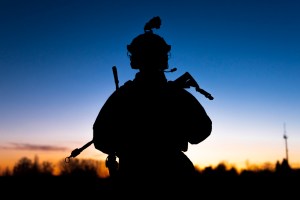