Federal data scientists — both current and aspiring — this one’s for you.

The Office of Management and Budget is working with a number of partners across the federal government to figure out how to hire more data scientists, Deputy Federal CIO Margie Graves said Tuesday at ATC IAC’s Executive Leadership Conference in Philadelphia.

“Believe it or not,” she told the gathered federal IT audience, the government doesn’t have a data scientist occupational series. But OMB is working to fix that. “We’ve been partnering with Commerce, [the Office of Personnel Management] and 14 other agencies across the federal government to define what a good data scientist looks like, how do we partner with universities to create the kind of programs  that create the pipeline that brings data scientists into the federal government and, most importantly, how do we upskill and reskill current population,” she said.

It’s not just about direct data practitioners, Graves went on. She envisions a government where “every step in the executive chain” is data-literate — from C-suite decision-makers to folks in the field.

“How do we take the data that we have — which is ubiquitous and it’s incredible across the federal government — understand it, be able to leverage it at every step in the chain,” she said.

But of course, creating a data science occupational series is also about hiring. It’s about how the federal government advertises the jobs it has available, whether on USAJobs.gov or elsewhere, and how that impacts who applies for those jobs.

In July, OPM released a memo that gave agencies the go-ahead to add the parenthetical (Data Scientist) next to the official title for a variety of job listings.

“This guidance authorizes agencies to use a parenthetical of (Data Scientist) along with the occupational title for positions that perform data science work as a major portion of the job, and not as a collateral duty, for example Statistician (Data Science),” the memo reads. 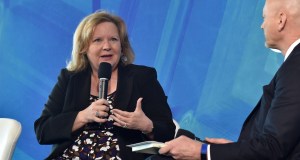