“The Department of Defense doesn’t have an innovation problem. It has an innovation adoption problem,” Jennifer Pahlka, a member of the Defense Innovation Board, said during her comments at a public board meeting in Crystal City on Tuesday.

This is an oft-recited refrain for the group, which was created in April 2016 to give the secretary of Defense advice on addressing future challenges. At this meeting, that advice focused on how the DoD can foster an innovative culture.

The group’s first 12 recommendations, released after its inaugural meeting in October 2016, were wide-ranging — from the recommendation that the DoD create a position for a chief innovation officer (currently on hold) to the suggestion that the agency assess the cybersecurity vulnerabilities of its weapons. This time, in unveiling four more “proto-recommendations” (the ideas will go through a public comment period before becoming final), the panel — which is chaired by Alphabet CEO Eric Schmidt — focused them around a theme: culture change.

There’s plenty of innovation going on within the DoD, multiple board members pointed out. But this innovation isn’t making the long-term impact various parties hope for. And this, the board indicated, is a skills and empowerment issue.

The first potential recommendation, introduced by Google’s vice president of access services, Milo Medin, is for some kind of DoD accelerator. The problem Medin thinks it may be able to solve? Speed of innovation.

“The DoD today is really not optimized for speed,” he said, to laughter in the room. Instead it is optimized for cost. But with an accelerator, Medin alleged, these aims can be combined. “I think if you optimize for speed you’ll get cost as a byproduct,” he said. “Its generally very hard to spend money quickly.” Details on what this accelerator would look like and what it would do were not forthcoming.

Next, Instagram COO Marne Levine talked about crafting a recommendation around clearer tech career paths within the DoD. Defense, much like other agencies, struggles to recruit top tech talent. Levine attributed this to the lack of clear career options for STEM specialists within the military.

Third, Code for America founder Jennifer Pahlka talked about the idea of creating a DoD “elevator.” This could be a follow-on to an accelerator program — an initiative aimed at taking people with good ideas and enabling them to move the ball forward.

“This is not designed to train people to be innovators,” Pahlka said, “but rather to empower the ones who are already in the DoD.”

Finally, California Institute of Technology professor Richard Murray spoke about the idea for a kind of executive education program to teach DoD leaders about the best practices of tech and innovation that exist in the private sector. Again, exactly what this would look like is still a matter of discussion.

The idea, the board suggested, is that recommendations like this — all focused on skills and talent and empowering that talent and culture — will support each other.

“We want to have fewer stories of people who said ‘I had this great idea and I had to go do it outside the Department of Defense,'” Pahlka said. “We are hearing too many of those stories and those are people who could be there doing this work, changing the DoD.”

Making culture change isn’t easy, though, the board acknowledged. “My experience as an executive in the private sector is that changing culture is almost impossible,” Schmidt said. Ideas like the ones floated on Tuesday aren’t sufficient, he said, but they’re a start. “We’ve got the beginnings of great success here,” Schmidt concluded.

The board will meet next in January 2018. 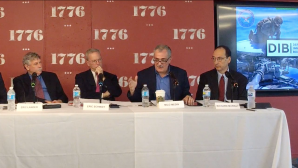 Defense Innovation Board narrows focus on culture change at DoD