The top leader orchestrating the military’s future network-of-networks operational construct called Joint All Domain Command and Control (JADC2) has not been impressed with the solutions industry has offered so far, he told an audience of mostly industry professionals Tuesday.

Joint Staff CIO Lt. Gen. Dennis Crall said his expectations were once high for industry, given its reputation for innovation, agility and using big data to build commercial solutions. But based on the pitches he received early on, he was forced to lower those expectations. And even then, the technology that companies offered to build for what will essentially be a sensor-driven, Internet of Things for the military still didn’t cut it, he said.

That’s a problem, Crall said at AFCEA Hawaii’s Indo-Pacific Tech Net virtual event. “I am looking for good enough and I have not found a good enough.”

Crall said the solutions he is looking for range from data management and tagging to identity, credential, and access management (ICAM). He still welcomes pitches from industry, but asked companies to step their game up.

“Everything we do from this point forward, it really is all about the data,” he said.

One big change Crall is looking to take is moving away from data standards — a “fool’s errand,” as he put it — and instead embracing the reality that military data coming off sensors in battle will inherently be messy and come in a diversity of formats, measurements and readability.

“There is going to be diversity; you have got to embrace the diversity,” he said. But how that diversity on a technical level becomes a strength for the U.S. military is a question Crall has yet to answer.

However, Crall is leaning toward “light” and “nimble” interfaces interlaced across a data lake that can help sift through and sort incoming information. “If industry wants to knock on our door and talk about that, I’m all game,” he said.

The general was equally candid with his assessment of DOD’s own technology chops when it has come to ICAM. In order to send, share and collaborate with data securely as part of JADC2, there must be solutions to verify the identities of users and data sources on a network. He said it’s one of the core building blocks for the military’s use of artificial intelligence, and at the moment one of its main roadblocks without an acceptable solution.

“We have struggled in the department for at least a decade,” Crall said. So far, no workable solution that can meet the scale and speed needed for JADC2 exists.

A JADC2 strategy penned by Crall and his team should hit the desk of the Deputy Secretary of Defense Kathleen Hicks within the week. The strategy’s approval will trigger a posture review, gap analysis and new implementation policy, Crall said. The secretary of defense will also review it.

In February, the strategy was days away from being sent to Gen. Mark Milley, chairman of the joint chiefs of staff. It’s unclear if Milley has already received a copy ahead of the deputy secretary.

Part of the implementation of the strategy and continued development of data sharing practices are new data summits. The first summit took place in late January, where senior civilian and military leaders across the services and allied partners met at Aberdeen Proving Ground in Maryland to increase collaboration. The summits will continue every 60 days providing a place to work on the technology sprints the other parts of the military are focused on, Crall said. 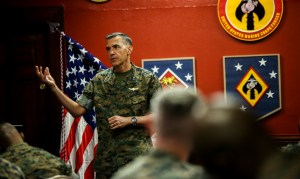