Six U.S. technology companies will receive a total of $258 million in research and development grants as part of the Department of Energy’s effort to build the nation’s first exascale supercomputer.

The money comes via ECP’s PathForward project, a procurement process that kicked off in April 2016.

“The PathForward program is critical to the ECP’s co-design process, which brings together expertise from diverse sources to address the four key challenges: parallelism, memory and storage, reliability and energy consumption,” ECP Director Paul Messina said said in a press release.

Each of the project’s six vendors will work on a distinct piece of the exascale puzzle, tasked with optimizing both the capacity of the computer and its energy usage. The companies themselves will also contribute at least 40 percent of the total project cost — DOE expects that around $430 million will be spent.

Today the world’s most powerful supercomputers work at petascale, which means they solve a quadrillion problems every second. The U.S. has five of the 10 fastest petascale supercomputers, according to ECP. However, China’s Sunway TaihuLight currently holds the top spot.

Exascale computing is expected to “realistically simulate the complex processes and relationships behind many of the fundamental forces of the universe,” according to the ECP website. It will also aid research in climate change, nuclear energy, precision medicine and more.

“Continued U.S. leadership in high performance computing is essential to our security, prosperity, and economic competitiveness as a nation,” Perry said in a statement. “These awards will enable leading U.S. technology firms to marshal their formidable skills, expertise, and resources in the global race for the next stage in supercomputing— exascale-capable systems.” 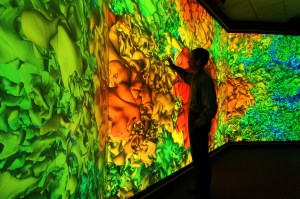