Senior Pentagon officials and lawmakers are sounding the alarm about the conditions of the nation’s aging defense-focused laboratories and testing facilities.

More funding and resources are needed to drive innovation and confront difficulties impacting the military’s research infrastructure, they said Thursday during a House Armed Services cyber, innovative technologies, and information subcommittee hearing on the Pentagon’s science and technology-aligned proposals for fiscal 2023.

“If we expect the department to attract the world’s best and brightest to produce state-of-the-art technologies, we must modernize our laboratory and test ranges,” Undersecretary of Defense for Research and Engineering Heidi Shyu told legislators in her opening statement.

Tens of thousands of officials are employed by DOD’s labs, which include dozens of facilities spanning more than 20 states. The scientists and engineers involved conduct basic scientific research and work to develop advanced military applications for present and future conflicts.

“Our basic research programs enable the foundational work that will define the technological capabilities of the Army of 2040 and beyond,” Deputy Assistant Secretary of the Army for Research and Technology William Nelson told lawmakers. “At the center, the Army Research Lab has built a network of regional hubs and labs to give us access to the widest spectrum of scientists in colleges and universities across the country. These talented researchers and academic partners perform cutting-edge research in a variety of critical areas to the Army including quantum science, synthetic biology and artificial intelligence.”

Nelson, who also serves as the Army’s chief scientist, added: “Due to several factors, many research and several test facilities would greatly benefit from revitalization and recapitalization. We’re making slow but steady progress by relying on a spectrum of Congressional authorities to resource and modernize these facilities. Your support to raise the laboratory infrastructure construction cost caps would be greatly appreciated.”

President Biden has repeatedly committed to bolstering America’s R&D pursuits and the public assets, like national labs, that make them possible. However, during the hearing a number of the officials pointed to continuously unfunded requirements amounting to billions of dollars needed to enable military-related lab building projects.

Subcommittee Chairman Rep. Jim Langevin, D-R.I., said more needs to be done regarding the infrastructure challenges that the DOD is grappling with.

“I have to say that it is shocking that we face a massive backlog in laboratory investment, more than $5.7 billion in the latest report to Congress. These challenges affect not just the pace and breadth of innovation, but also our ability to attract and retain the top-tier talent that we depend on. I’m committed to doing everything in my power to address this issue, and I look forward to hearing just how to put the department on a sustainable path of research facility investment. This could not be more pressing,” he said.

Shyu said a key priority of hers is to help the department land more funding for military construction (MilCon) to improve its labs and testing enterprise.

“There’s about $500 million needed by the Navy’s Electromagnetic and Cyber Countermeasures Laboratory to modernize the lab in order to develop and evaluate emerging threats and to be able to support an increased number of classified processes. This is just one example of a chunk of money that we need,” she said.

Meanwhile, officials see a need to improve technology transition from R&D to procurement.

Air Force Deputy Assistant Secretary for Science, Technology and Engineering Kristen Baldwin noted that officials on her team recently completed a comprehensive study on the topic. In a briefing with Air Force Secretary Frank Kendall next month, they plan to recommend increased funding for efforts to help technologies “cross the valley of death.” The DOD acquisition community often uses the term “valley of death” to describe how promising emerging tech often fails to transition from labs and testing facilities to a program of record and get fielded.

“I would say that many of us are frustrated, as you are, with our struggle to keep up with the pace of technology transition and modernization that perhaps some of our peers have achieved,” Baldwin told lawmakers. 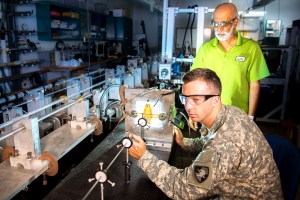