WRIGHT-PATTERSON AIR FORCE BASE, Ohio — National and military laboratories’ aging infrastructure has deteriorated — and that concern is top of mind for the Pentagon’s No. 2 official.

After visiting the Air Force Research Lab (AFRL) on Wednesday during a multi-state trip to observe military-related technology pursuits, Deputy Defense Secretary Kathleen Hicks confirmed that she’s keen to help drive the modernization of the research and development facilities that the DOD relies on for next-generation capabilities.

“It is an issue area that I’m very focused on,” Hicks told reporters.

Contemporary shortfalls impacting America’s R&D infrastructure are no secret. National security officials have been making requests to Congress for upgrades to national laboratories, as well as the United States’ hypersonics testing infrastructure. Meanwhile, China has developed advanced facilities to test its next-generation weapons.

“I do know — as you’ve probably heard all the bits and pieces of — they have more we have more in certain areas,” Richard Vaia, AFRL’s chief scientist for materials and manufacturing, told FedScoop during a briefing. “I think it’s not only hypersonics infrastructure … It’s really critical to accelerate the nation’s testing. And you have to do it not at just the system level. But you have to build an integrated system of systems of being able to assess the components and the ideas, and then build them up. And right now, I think we could do better in creating a coherent, integrated vision for hypersonics as well as expanding it in all the areas.”

On her tech-focused trip this week, Hicks said the Defense Department is trying to find “dollar solutions” to help address this problem. Following a classified briefing she received at AFRL, she told FedScoop that, in her view, the Pentagon’s fiscal 2023 budget request includes a “pretty aggressive” investment in labs that are used for testing.

“In the department, we talk a lot about test and lab [needs]. And we have added funds in test and lab [initiatives] in the ’23 budget. We have a pretty aggressive test and lab investment, we’ll keep coming back at that. The deficit on test and lab infrastructure for the department is substantial. It has been under-invested-in for a very long time. So no one budget year will get us out of that hole. We will keep having to buy down that risk,” Hicks noted.

The defense executive added that there are opportunities to work with industry and allies to tackle infrastructure shortfalls.

“We don’t have to solve all of this on the DoD side alone. But I think we have a good pathway forward. It’s going to take a few years,” she said. 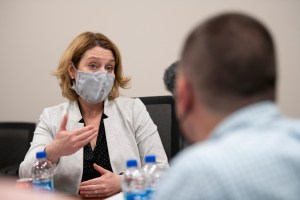