Many Pentagon leaders from the secretary of defense to the head of the Defense Innovation Unit agree: The Department of Defense needs to do more to acquire — and scale — innovative technology.

At the Aspen Security Forum this week, Secretary of Defense Mark Esper said the DOD needs to be bolder and promote a culture of taking greater risks, themes Pentagon leaders have long pushed. DIU Director Mike Brown put a finer point on the problem, saying the prototype contracts his office churns out, while a step in the right direction, are a drop in the bucket and not leading to enough of the scaled innovation the DOD truly needs.

The threat of the same-old, same-old pace is real, Esper, Brown and others said during the forum. And the result is the U.S. is losing its technical edge to great-power competitors like China.

“The overarching story is a pretty bad one, and is heading in a worse direction,” said Chris Brose, former staff director of the Senate Armed Services Committee.

Keeping the U.S.’s edge comes down to how quickly the military can learn to scale, Brose and others said. The DOD needs to scale the adoption of emerging technology, scale the innovative culture built by organizations like DIU and scale how the military buys new tech in ways that circumvent the drawn-out acquisition process that has stymied innovation for decades.

Recently John Hyten, vice chair of the joint chiefs of staff, told Brown: “Enough prototyping already,” the DIU director explained. “How do we buy at scale?”

Eric Chewning, Esper’s former chief of staff, said part of successfully scaling better acquisition practices includes a holistic rethink of how the military buys and uses technology. There are three elements common to all innovation projects, he explained: technology, acquisition and a proper warfighting concept. That is, industry needs to present the technical capabilities, DOD needs to have the alacrity to buy it and the services need to have an actual concept to use it.

For instance: A flying carpet would be cool for the Army to have, but the military doesn’t conceptually have a need for it. “[DOD] needs to move all three legs in tandem for the system to work,” Chewning said.

Eyes on the prize

The top military tech priority for the next administration should be the network-of-networks system for linking services across all five domains of warfare — air, land, sea, space and cyber — Michèle Flournoy, the former No. 3 in the Pentagon said during the online forum.

Achieving the vision for this Joint All-Domain Command and Control (JADC2) system Flournoy described requires fielding artificial intelligence at scale across a communications system that will also need to withstand intense cyber interference.

“We need a command and control system that is power by AI,” said Flournoy, who has been floated as a frontrunner for the top job in the Pentagon if presumptive Democratic presidential nominee Joe Biden were to win in November.

The Joint Force plans to put the bow on the JADC2 concept by December, taking care of one of the three important elements Chewning described. The question remains if the other two legs will keep pace.

Esper echoed Flournoy’s sentiment, saying that AI will change the “character of warfare” and should be a priority. The problem is that AI companies still can’t easily work with the DOD at the scale needed to power JADC2, Shield.AI CEO Ryan Tseng said during the forum.

“The DOD and the national security sector need to find a way to allow companies to generate returns for their investments in innovation,” Tseng said. The length of time it would take to earn money from a contract with DOD doesn’t comport with the demands of investors and the pace of the innovation market, he said. Without the right incentive structure, little will get past research and development and prototype grants.

Brose described another hurdle in fully fielding what his former boss Sen. John McCain called the “defense industrial congressional complex.” Congress, he said, needs to give the DOD more flexibility in managing its portfolios and be a partner in reducing the barriers to purchasing technology and replacing old legacy systems.

“This is truly an ecosystem,” he said of the special interests and politics that can inhibit reclaiming technical advantage. 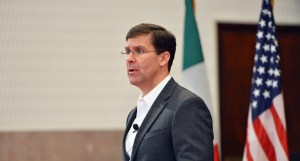