The top two leaders in the Pentagon in some of their first major public speeches shared visions for a Department of Defense that heavily relies on emerging technologies and creating new strategies to use them.

Secretary of Defense Lloyd Austin emphasized the need to depart from previous ways of waging war and focus on new, technology-driven tools and strategies during his first major speech, given in Honolulu at the change of command ceremony for Indo-Pacific Command last Friday. The same message was echoed later that same day by Deputy Secretary Kathleen Hicks, who said that the department must “aggressively take steps to be a data-centric organization” and create new ways to use data in the field and in command centers.

These remarks designate a much more specific stance than in past administrations around building a military force of the future that is dependent on tech.

They want “to mark a departure from the approach of DOD under [former Secretary of Defense James] Mattis,” Bryan Clark, a senior fellow at the Hudson Institute, told FedScoop about the leaders’ remarks.

Mattis focused on traditional lethality and readiness during his two years as President Trump’s secretary of defense, rather than the long-term technology-driven competition. And Mark Esper, Trump’s second confirmed defense secretary, often referenced artificial intelligence changing the “character” of warfare, but rarely spoke on its applications or specific uses.

But Austin and Hicks are taking a very different, much more direct approach when it comes to tech. “Our fiscal year [2022] budget will provide early insight into our strategic approach,” Hicks said at the Aspen Security Forum. “It will support defense research, development, test and evaluation funding. This will lead to breakthrough technologies that drive innovation and underpin the development of next-generation defense capabilities.”

While not mentioned directly by either Hicks or Austin, both implicitly pushed the capability that the new digital concept of operations called Joint All Domain Command and Control (JADC2) promises to deliver. The idea is to create a so-called “internet of military things” where weapons can share data to enable distributed, speedier decision-making. It’s a wonky topic that has been getting increasing nods of support from leaders in public.

“In this young century, we need to understand faster, decide faster, and act faster,” Austin said in his speech. “Our new computing power isn’t an academic exercise.”

Austin also foot-stomped the domains where threats are increasingly proliferating: space and cyberspace.

“So what we need is the right mix of technology, operational concepts, and capabilities — all woven together in a networked way that is so credible, flexible, and formidable that it will give any adversary pause,” he said.

Hicks directly identified China as the leading threat driving the department’s accelerated tech-driven push. China has the advantage of combining its economic, military and tech capabilities to challenge U.S. interests, she said.

And while China is the top threat, it isn’t the only one. “We have never had the luxury of being faced with only one threat,” she said.

This landscape will require the DOD to overcome “institutional inertia” and find new processes that can keep pace with rapid changes to capabilities. Hicks stressed the need to change the budgeting process to account for what the DOD needs to buy, including software and tech that changes faster than the current two-year cycle allows for.

“Platforms will always matter, but it’s the software…it’s those pieces that make such a critical difference in our capability,” she said. “That’s a different funding picture.”

Neither Austin nor Hicks detailed exactly how their view of tech-driven warfare will play out. But that was to be expected, Clark said. With the department’s full budget request coming in late May, they wanted to keep their cards close to the chest.

“They started out in a very aligned point,” he said. “That’s different and I think that’s useful for them.” 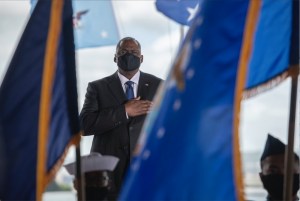