The Pentagon’s health restriction level is now HPCON-C — the facility’s second-highest level — as the novel coronavirus pandemic continues to spread through the Washington, D.C., region, Secretary of Defense Mark Esper announced during a press conference Monday.

The restriction means more civilians, military officers and contractors will be barred from accessing the building and forced to telework to the degree they can. It is unclear exactly how many more people will be forced to telework, but the DOD’s networks already faced “unprecedented” demand under previous restrictions, an IT official said. The decision comes after a DOD contractor died over the weekend after contracting the virus.

Before Monday’s announcement, the Pentagon’s workforce size already was “down considerably” with about 60 percent fewer people in the building, Esper said. The DOD would not say how many more employees would be asked not to come into work under HPCON-C, or if increased teleworking demand would cause added strain on networks.

“DoD networks are ready to support the department’s mission in a telework environment,” Lt. Col. Robert Carver, a DOD spokesman, said in a statement. “Each Department employee will have the type of network access he or she needs to accomplish their mission.”

The DOD’s networks were already under strain from teleworking demand since March 16, with the department needing to blocked all streaming sites due to bandwidth struggles.

Other military installations in the National Capital Region have been on HPCON-C, including armed forces retirement homes and Joint Base Andrews. HPCON-C means there is substantial risk and sustained community transmission of the virus. And elevation to HPCON-D, the highest threat level, would mean that severe risk and widespread community transmission is threatening DOD operations.

Esper made the point that commanders across the military have the authority to designate their own threat levels and mitigation efforts to stem the spread of the virus. The Navy had already been on HPCON-C (minus), slightly less than full HPCON-C, and given commanders authorization to “use maximum latitude to authorize telework,” according to public personnel memos.

Civilian government agencies have been mandated to work on “maximum telework” since March 15. 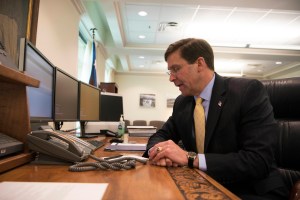