In a report by the National Academies of Sciences, Engineering, and Medicine, sponsored by the Army, a committee of authors urge the Department of Defense to develop countermeasures to be used against attacking drones, and to do so fast.

“Unless potential threat sUAS capabilities and counter-sUAS efforts are addressed more rapidly,” the report states, “the vulnerabilities of dismounted infantry and lightly armored vehicles to sUAS threats will grow extremely quickly, potentially to the point where force protection standards cannot be met for soldiers in the field.”

The challenge, as the report puts it, is that drones are both gaining increased flight time and carrying capacities and getting cheaper. And these aren’t specialized drones —  they’re hobby systems, ones anyone can buy off the internet.

“With creative thinking and engineering, at which current and potential adversaries have proven adept, hobby sUASs can be used to pose a significant threat to U.S. warfighters, especially lightly armored vehicles and dismounted infantry in the U.S. Army, U.S. Marine Corps (USMC), and Special Operations Forces,” the report says.

Combatting just one drone is difficult enough (though the report alludes to work the DoD is already doing in terms of countering one-off threats), but it gets even more so when the drones can travel in groups (under 40 sUAS) or swarms (over 40 sUAS). The report acknowledges that “for years, the United States appeared to have a clear lead when it came to swarming sUASs,” while also noting that peer nations are making progress as well. “A continued U.S. technological lead cannot be assumed,” it states.

Coordinated swarms aren’t a reality today, the report says, but they could be coming sooner than the Army predicts. The technology is out there, just maybe not for hobbyists: Viewers of the opening ceremonies of the Pyeongchang Winter Olympics will recall a group of coordinated Intel drones that formed into different shapes above the stadium.

The good news is that the report committee has some suggestions for counterdrone measures — seven “high-impact” ones, in fact. Those, however, are not revealed in the unclassified public version of the report. Several companies are already in the drone-hacking business. 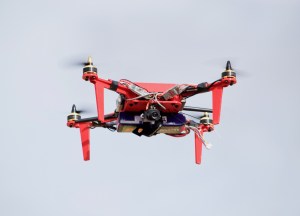 Army must watch out for ‘collaborative swarms’ of drones, report concludes