Two Air Force installations recently inked deals to use facial recognition technology to verify the identities of those coming on base — a move that can increase the physical distance during security checks as the coronavirus pandemic continues.

The Air Force awarded TrueFace phase two Small Business Innovation Research contracts to install its technology at Eglin Air Force Base and Joint Base McGuire-Dix-Lakehurst. The company calls its system “frictionless access control,” where security personnel do not need to be present for a check, adding that it can verify a face in one to two seconds.

CEO Shaun Moore told FedScoop TrueFace’s business has exploded since the pandemic began. The company is billing itself as a technology that can help stop the potential spread of coronavirus by replacing human-led ID checks with its computer vision.

“A year ago, facial recognition was a ‘nice to have’ for these bases,” Moore said. Now with the pandemic and many base operations going on with personnel still needing to physically show up, it has become more necessary, he said.

The Air Force has been interested in facial recognition since before the pandemic, with its emerging technology rapid acquisition program AFWERX issuing small contracts to companies like True Face starting in 2019. Despite some large companies stepping back from developing the technology and other parts of the government coming under fire for its use, the Air Force appears to be continuing to use and development facial recognition.

Many facial recognition systems have been criticized for being built with bias and giving less accurate results when identifying non-white and non-male faces, per the National Institute of Standards and Technology. TrueFace says it uses a diverse database called “Fairface,” which has roughly equal sample sizes of races and genders to try and reduce the bias of its algorithms. With a more balanced database, the company says its technology develops less implicit bias and can more easily recognize non-white and non-male faces.

“We have been focused in on collecting diverse faces from all around the world,” Moore said. 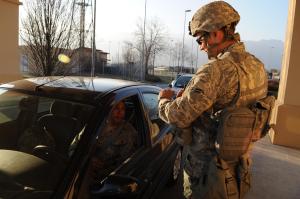