Technology transfer from the federal government doesn’t often get a lot of attention, and yet investment in federal labs and grant programs has yielded some big wins in the private sector — think baby formula, barcodes and weather apps. So what other inventions are out there, hiding in a bit of federal research?

That’s where the Fed Tech accelerator comes in.

The program matches would-be entrepreneurs to technologies developed in federal labs. The entrepreneurs take early-stage research and run with it, often attempting to find a broad application for a technology developed with a very specific government or military purpose in mind.

Founder and organizer Ben Solomon’s job is to serve as a matchmaker between the two sides. He’s the reason Thomas Luginbill and Brandy White met, and the result of their connection is a startup with a new idea for protecting emergency first responders.

It all began in 2013, when Luginbill was a grad student at the University of Maryland and saw a flyer for Fed Tech, then part of the regional D.C. I-Corps program. He had already started one company (and served as a founding member of a fraternity while in college) so an entrepreneurship program like this one “was pretty much right up my alley,” Luginbill said.

White, meanwhile, was — and still is — a research chemist at the Naval Research Lab (NRL). “I do a lot of different science, but almost all of my science is focused on protective applications,” White told FedScoop. Things like protective coatings, or chemical and biological sensors. “Everything that I do is motivated by supporting the warfighter,” she added.

Fed Tech brought these disparate parties together, but that’s not what is unique about the program, which is now funded by the Department of Defense’s MD5 program. Nor is Fed Tech’s work in transferring technology from government agencies to the private sector unique, though it certainly aids a challenging process. What’s distinctive is the stakes — Fed Tech asks entrepreneurs to explore the commercialization potential of a technology for just two months. The limited scope means participants can be more adventurous in their thinking.

If at the end of that time frame no path forward is clear, both parties continue on their separate ways. This happens in about half of cases, Solomon told FedScoop. But sometimes an entrepreneur decides to take the next step — and then the next, and then the next. That’s what happened with Luginbill and White.

When a newly launched Fed Tech came knocking at the NRL in 2013, a substance White had developed was a promising candidate. It coats fabric for protection against chemicals, but leaves it more breathable than a hazmat suit. It’s a powder that gets turned into a viscous liquid, and then it’s pressed into the fabric, changing the molecular structure of the fiber. The fabric then can trap chemicals and expel them via a form of photosynthesis. “It sounds complicated but it’s actually quite simple,” Luginbill told FedScoop.

Solomon paired Luginbill with White even though, Luginbill recalled, he was frankly more interested in a NASA technology at the time. But Luginbill got to work on protective coatings anyway.

“I was like, ‘maybe we can use it in baby diapers so it can neutralize chemicals from babies who are using diapers. And maybe we can use it in wine bottle corks, because sometimes wine spoils because chemicals from the air get into the wine and spoil it,'” Luginbill said, of his early market ideation stages. “I went through all these different scenarios but ultimately I came back to what the original intent, was which was for fabric.”

White, meanwhile, was thrilled to see Luginbill take the coating and bring some imagination to it. “It can be kind of hard for us to make connections with commercial entities,” she said. “It’s not what we specialize in.”

But that doesn’t mean White isn’t interested in seeing her inventions in the commercial space. “What bigger win could there be,” she says, than taking an idea and turning it into a real, money-making product.

Luginbill validated a market for the protective fabrics and, at the end of his two months with Fed Tech, told Solomon he was interested in licensing the technology to take it further. “I think he was surprised,” Luginbill said. But Solomon helped make it happen nonetheless.

“That first summer was a lot of back and forth between me and the lab,” Luginbill said. “It was commercialization plans, forms, negotiations, all sorts of things.”

But eventually, a company called Grey Matter was born. The target market for the technology? Uniforms and other products used by first responders. “Current chemical suits tend to be hot and uncomfortable to wear, and so not really suited for longterm use,” White told FedScoop. But sometimes longterm use is necessary. Her invention, which Luginbill now calls SPIDER, might give “a little bit less” absolute protection but it can be worn for “very extended periods of time.” A worthwhile trade off.

Luginbill raised some money, validated the product with a third-party lab and began looking into how to sell the stuff. At first, he said, he thought Grey Matter might market the protective substance directly to procurement offices, as-is, but eventually he decided it would be easier to sell to the companies that manufacture uniforms for soldiers, first responders and the like.

These days Luginbill’s father Stephen is running the company, which is named after Walter White’s business in the show “Breaking Bad,” while Luginbill works on his Ph.D and builds an entrepreneurship training program of his own at the College of Southern Maryland. SPIDER is not quite to the mass production stage yet, but “recently it’s really really picked up” and they’re negotiating with textile companies, he said.

Luginbill has nothing but positive things to say about his experience with Fed Tech, and what came next. Sure, dealing with federal labs can be a little challenging. But White’s commitment to working with him made all the difference.

“The Fed Tech process was awesome for me,” Luginbill said.

White is a realist when it comes to assessing the possibility of any idea moving from a federal lab through the licensing, validation, manufacturing and sales to a big commercial splash. But she maintains that a process like Fed Tech is worth it in any case — she continues to work with Solomon and the program most recently by sharing some sensor technology she developed with a group in the fall 2017 cohort.

“If nothing else, what you get out of it is the tech gets a lot of exposure,” White said. “That’s really valuable.” 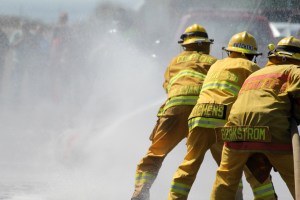