A proposal to codify and elevate the authority of the White House’s top IT officer passed in the House on Friday.

The Federal CIO Authorization Act of 2018 — sponsored by Reps. Will Hurd, R-Texas, and Robin Kelly, D-Ill. – aims to make the Federal CIO a presidentially appointed position that reports directly the Office of Management and Budget director, instead of the deputy director, as it currently does. Suzette Kent is the current Federal CIO.

The bill, which passed 391-41, also proposes codifying the Federal CISO role as a presidential appointee position, providing a clear line of accountability and leadership for the federal IT infrastructure at a time where cybersecurity has become a pivotal issue for the government. The CISO would continue to report to the CIO under the legislation. Grant Schneider is currently the Federal CISO.

“Americans should be able to trust their government to keep their information safe,” Hurd said in a statement. “This bill helps keep the vast information stored by the federal government secure from hackers by making clear that the Federal CIO is in charge of the security of our data across the government.”

Kelly said the bill modernizes the government’s approach to IT by reauthorizing and renaming the Office of E-Government as the Office of the Federal Chief Information Officer and calling on the CIO to deliver a report to Congress on how to consolidate IT operations across the federal enterprise.

“By codifying and reauthorizing the federal CIO and CISO roles, we will continue streamlining government IT processes. This effort is part of our larger push to finally bring government into the 21st century,” she said in a statement.

Hurd and Kelly unveiled the bill in September as another proposal to empower the top federal IT official to take the reins of the government’s approach to technology.

Both Congress and the White House have been actively trying to give both the Federal and agency CIOs more authority to determine the path of IT modernization with legislation like the 2015 Federal IT Acquisition Reform Act (FITARA) and an executive order signed in May.

The Senate does not have a companion bill. The bipartisan support for Hurd and Kelly’s measure suggests that even if the Senate doesn’t act this year, the bill will return in 2019 in the Democrat-controlled House. 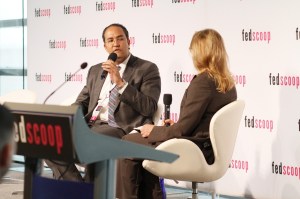