The bill that would extend key provisions in the Federal IT Acquisition Reform Act passed in the House on Wednesday.

The FITARA Enhancement Act, co-sponsored by original FITARA  authors Reps. Gerry Connolly, D-Va., and Darrell Issa, R-Calif., would remove or extend the sunsetting of the 2014 law’s provisions for data center consolidation; transparency and risk management of major IT systems using the IT Dashboard; and IT portfolio, program, and resource reviews using PortfolioStat.

The House bill passed easily by voice vote. It awaits action in the Senate, where Sen. Steve Daines, R-Mont., issued an identical bill in late September.

Connolly said on the floor Wednesday that the sunsets are necessary to buy extra time for some agencies that are lagging in meeting FITARA requirements.

Both he and Issa touted their bill as a sort of continually evolving “framework” and “rubric” for how federal agencies buy IT, thus affecting other tangential initiatives like the Modernizing Government Act and the DATA Act.

For instance, FITARA, combined with the launch of the DATA Act earlier this year, allows for the consolidation of “purchasing across a vast number of agencies, eliminate redundancy, and in fact buy better,” Issa said.

But there’s more work to be done, he said, suggesting that enhancements to FITARA may be added as needed, unlike prior federal IT legislation that went largely unchanged after it became law.

“Unlike Clinger-Cohen, which went on for 18 years before being updated, we are just three years past the implementation of this bill, and with Congressman Connolly’s effort, we’re coming back and making real changes — ones that can continue the process and speed it up,” Issa said. 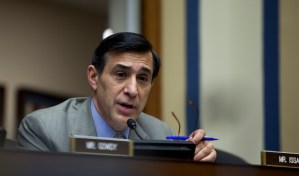