Every once in a while, even on Capitol Hill, our elected officials get to have a little fun. On Tuesday morning, Rep. Lamar Smith, R-Texas, showed us all how it’s done.

Under his leadership, the House Science, Space and Technology Committee convened a hearing on “urban air mobility” (flying cars). “Are Flying Cars Ready for Take-Off?” the hearing title asked, provocatively.

The short answer, of course, is no.

Despite some exciting developments — like Uber’s partnership with NASA for flying taxis or the company Terrafugia’s promise that its flying cars will be on the market next year — there’s still a lot to be worked out. In their testimonies, witnesses from Uber, Terrafugia, NASA, Bell and the Georgia Institute of Technology mentioned the many challenges that must be addressed before said “take-off” — safety, noise, air traffic control and management for dense urban areas.

It’s no small task. And, as is generally the case in areas of emerging technology, the technological challenges will be solved far before the cultural and societal concerns are settled. Picture all the rhetorical questions that inevitably arise in any hearing about drones, multiply that by 10, and you’ve got a good idea of what Tuesday’s event looked like.

It soon became clear, though, that the premise of imminent “take-off” wasn’t the point at all. Committee chairman Smith is just super into flying cars.

“Several weeks ago I was taking a walk at the Mall,” Smith said in his opening statement, “and I noticed a mother with a young son off to the side and it looked like, to me, the young son was operating a remote control car… and suddenly the wings sprouted from the side of the car and the car took off! This was the first remote-control flying car that I’ve ever seen in my life.”

So naturally, as any enthusiast might do, Smith bought one himself. “I flew it in Lincoln Park a few weeks ago and it worked wonderfully,” he said with a smile, before going on to elaborate on the specific “advantages” of the model.

“You simply push one button, and the wings come out horizontal, and you’re off the ground in 15 feet,” he said. “You can’t beat it.”

And Smith didn’t stop there — oh no — he bought (and brought) a remote-control flying car toy for each member of the committee and each of the five witnesses.

“I know a good thing when I see it,” he quipped.

Oprah moment over, Smith thanked the witnesses for sharing their expertise. “Obviously this is aspirational,” he said, “but soon to be, we hope, real-time and realistic.” 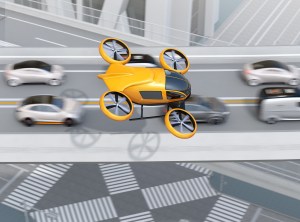 Are flying cars ready for take-off? No, but Rep. Lamar Smith is