Frank Kendall — the last head of defense acquisition in the Obama administration before the position was reformed — is President Biden’s pick to be secretary of the Air Force.

The White House announced Biden’s intent to nominate Kendall to the role Tuesday.

During his most recent tenure in government, Kendall served as undersecretary of defense for acquisitions, technology and logistics between 2011 and 2017. In an earlier stint at the Department of Defense, he was deputy director of defense research and engineering, before leaving to serve as Raytheon’s vice president of engineering.

Kendall, an Army veteran who is a lawyer and engineer by training, has been an outspoken critic of the Cybersecurity Maturity Model Certification (CMMC), the DOD’s new requirements for contractors to verify their cybersecurity compliance with third-party assessments. Kendall could have some sway in how one of the most tech-savvy military services implements the program.

“If they keep charging on ahead, it will blow up,” Kendall told FedScoop about the program last summer.

Kendall will not be the only senior Air Force civilian leader critical of CMMC. CIO Lauren Knausenberger has expressed skepticism over the program’s efficacy and potential to scare off startups and emerging technology companies from working with the department.

“I have mixed feelings on it personally,” she said in April. “I think if we lock it down so that we are not going to do business with certain people because they don’t meet [CMMC], I think that limits our options.”

Kendall will also oversee the Air Force’s many major emerging technology programs in its broad technology portfolio. One of the highest tech priorities for the service, the Advanced Battle Management System (ABMS), will rely on attracting artificial intelligence companies to support the program that aims to create an Internet of Things-like concept for war.

As secretary over the greater Department of the Air Force, Kendall will also be the top civilian in charge of the new Space Force. The newest branch of the military has been focused on advanced technology and securing satellite communications, efforts that will likely draw on Kendall’s engineering background for oversight.

“Frank Kendall is exactly the kind of public servant we need at the helm of the Air Force at a time when the service is navigating so many unique challenges, including effective acquisition to meet our nation’s future threats,” Smith said in a statement. 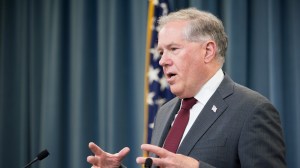