The Russian invasion of Ukraine is providing an important case study for how information warfare can play out in the modern era, according to a top U.S. Air Force general.

“As we’re in competition leading up to this crisis, the ability of our enterprise to support our senior leaders and the [intelligence community] and the sharing with our secretary of state, with the National Security Council, with the president, with the secretary of defense — and the ability of us to share information with our partners and allies to tell them exactly what was going to happen at the timing of tempo when it happened — was amazing,” Lt. Gen. Kevin Kennedy, commander of 16th Air Force, said Wednesday in a presentation at the Department of the Air Force Information Technology and Cyberpower conference in Montgomery, Alabama.

In recent years, foreign information operations have become more prominent and efforts to effectively combat them have appeared difficult. However, members of the intelligence community have emphasized the success of the disclosure campaign across the U.S. government, private sector and partner nations, that has been conducted during the Ukraine-Russia crisis.

The intel and information the U.S. government gathered and shared helped posture Ukraine to be ready to defeat Russian aggression, Kennnedy said.

“Now as we moved into crisis, we’re seeing how their ability to understand the environment is being able to them to help to maintain stasis during this conflict. We really saw it play out in real time,” he added.

In the coming months and years, however, there will be further analysis on why the invasion wasn’t forestalled, or what the value of cyber and the intelligence enterprise was and how that can be applied in the Pacific, where tensions between China and the United States are running high, Kennedy said.

“When we’re talking about integrated deterrence is it’s an informational outcome,” he said, referring to one of the main pillars of the Biden administration’s national defense strategy. “Creating the effect in the mind of your adversary that today is not the day to take on the power and might of the United States of America, the United States Air Force, the United States Space Force, or any of our partners and allies.”

“What I’m doing is I’m writing a novel. I could be the third chapter, I don’t know where it’s going. But I’m writing a narrative and I’m moving that narrative in the direction that I want it to go,” he said. “I’m contesting the narrative that my adversary’s having and removing his ability, or her ability, to push that narrative out into our audiences and to our partners and allies.”

The goal is to expose adversaries’ malign activity and cause them friction. That could include providing accurate information such as revealing the existence or positions of their military assets or activities.

“We are finding infrastructure that adversaries are using to push these narratives in the information environment, and we’re moving them,” he said. “We work across the interagency to make sure that we’re finding those outlets and we’re taking them off the battlefield.” 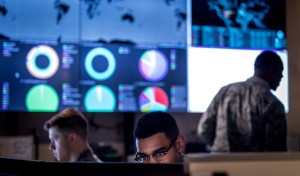