The Space Force has officially established its own cryptologic component, FedScoop has learned.

Secretary of the Air Force Frank Kendall made the notification July 2, according to a Space Force spokesperson. The director for intelligence, surveillance and reconnaissance, S2, will serve as the service cryptologic chief with the S2 staff serving as the cryptologic staff.

Until recently, the Air Force’s cryptologic component, 16th Air Force, has also performed that role for the fledgling Space Force, which falls under the Department of the Air Force.

“We did oversight of all their [signals intelligence] activities, some of their cybersecurity-related things and in relation to specific security of their national security systems,” Lt. Gen. Timothy Haugh told reporters in late July a few days prior to exiting command of 16th Air Force, regarding the work the organization did for Space Force. “I’m really proud of the work that our Air Force cryptologic office has done to help grow a space cryptologic office.”

In January 2021, the Space Force was added as the 18th element to the intelligence community with its S2, the first such addition since 2006. 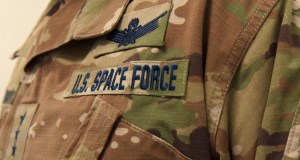