Over the course of the past two and a half years, at the request of Congress, GAO agents went undercover and bought an AR-15 rifle and an Uzi submachine gun on the dark web.

In the resulting report publicly released Dec. 21, GAO explains that this exercise was an attempt to “assess the extent to which [the Bureau of Alcohol, Tobacco, Firearms and Explosives] is enforcing existing laws and investigate whether online private sellers sell firearms to people who are not allowed or eligible to possess a firearm.”

ATF, as the Department of Justice bureau is known, is tasked with investigating violations of the laws that govern the sale of firearms. This job is complicated by the continued rise of online commerce. “The current federal legal framework of statutes and regulations governing the buying and selling of firearms does not specifically address the use of the Internet to facilitate these transactions,” the GAO report notes.

But generally there are a few ways in which a legal firearm purchase can be made online. The first is from a holder of a federal firearms license (FFL) — think gun store. The buyer orders the gun online, then completes the purchase in person and the FFL holder is responsible for submitting paperwork necessary for a background check. People can also buy firearms from an individual who is not licensed — if the buyer and seller live in different states this must be done through a FFL holder in the buyers’ state. But if buyer and seller live in the same state and both can legally own a gun, then a direct sale is allowed. Laws governing this kind of transaction are vague and very dependent on good seller behavior — as the GAO report states “a transaction between unlicensed individuals would be illegal if the seller knows or has reasonable cause to believe that the buyer is legally prohibited from possessing firearms or is a resident of a different state than the seller.”

So GAO set out to determine how well these laws actually work by trying to buy some guns online.

The watchdog attempted transactions on both the “surface web” — the internet we all know and love — as well as the dark web, which GAO defines as a portion of the web that “contains content that has been intentionally concealed and requires specific software,” typically the Tor browser.

On the surface web, federal regulations seem to hold up pretty well — GAO was ultimately unsuccessful in all of its 72 attempts to purchase a firearm. In 56 cases, the seller refused the sale. Twenty-nine refused on the grounds that they would not ship a firearm, and 27 refused after the undercover GAO agent “revealed” that they are prohibited from owning a gun. In an additional five of the 72 attempts the account that the GAO agent set up was shut down by the website itself. The remaining attempts GAO classifies as “scams” — including two where the agent paid the seller but the firearm was never delivered.

On the dark web, though, GAO did manage to acquire two firearms. Agents made seven attempts without giving any information to suggest that they were prohibited from owning a gun. In the end, agents acquired an AR-15 semiautomatic, shipped directly to an undercover address, and an Uzi submachine gun. Both of these sales were likely violations of the law.

“We are referring information regarding our two dark web purchases to applicable law-enforcement agencies to inform any ongoing investigations for any further action they deem appropriate,” the report states.

The report offers no recommendations — the results of the undercover test, GAO says, “are illustrative and nongeneralizable.” The challenge of law enforcement in the hidden reaches of the internet persists. 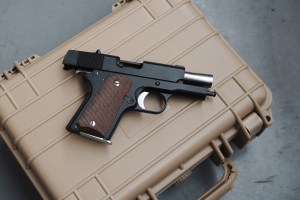