Immigration and Customs Enforcement (ICE) has incomplete data on whether foreign students from adversarial nations like China pose risks for transferring key technologies from U.S. universities to foreign entities, a government watchdog found.

ICE has incomplete and flawed data regarding factors indicating the types of students—including from China—who may pose a greater risk of transferring technology to foreign entities, a Government Accountability Office report from earlier this month highlighted.

“Better data could potentially help focus efforts in a way that helps avoid damaging the pipeline of talented students and researchers coming to U.S. universities,” said Kimberly Gianopoulos, Director of International Affairs and Trade at the GAO.

“There are many international students at U.S. universities, and those students who potentially pose a risk of technology transfer are a small group within that universe, so better data could help the U.S. government know where to focus its efforts,” Gianopoulos told FedScoop in an email exchange.

The federal government spends billions of dollars each year on research conducted at U.S. universities. In 2019, more than 1.5 million F-1 and M-1 students enrolled in exchange program-certified institutions, according to data from the Institute of International Education.

ICE’s foreign student and scholar database contains data on the number of graduate students from countries of concern for technology transfer, such as those from China. Between 2016 and 2020 about 723,000 Chinese nationals participated in graduate-level STEM programs, according to a GAO analysis of ICE data.

Students from India and China make up the largest number of foreign graduate students studying Science, Technology, Engineering, and Math (STEM) fields at U.S. Universities between 2016 and 2020, with hundreds of thousands of students each.

To prevent U.S. university research from being transferred for the benefit of China and other adversaries, in the past six years federal agencies that fund sensitive research increased investigations of researchers for fraud and failure to disclose potential sources of foreign influence, according to agency data reviewed by GAO.

These investigations have resulted in the removal of individuals from research positions because of undisclosed affiliations, such as receiving funding from a China-affiliated institution.

Such investigations have attracted controversy and some have fallen apart because of a lack of evidence. Earlier this month, Chinese American hydrologist Sherry Chen won a $1.8 million settlement in two lawsuits filed against the U.S. government for wrongful prosecution and dismissal from her job at the National Weather Service.

The GAO report says ICE has not established key metrics to fulfil a required assessment of whether it needs to modify its database to collect additional data related to some risk factors, in part due to focusing its available resources on other priorities.

Furthermore, ICE’s informational data on students’ employment in the U.S., which may indicate whether they have access to technology, is incomplete.

GAO recommended the agency complete its internal assessment of such foreign student data and improve its student employment data to strengthen federal government efforts to identify and assess technology transfer risk. ICE concurred with the recommendations. 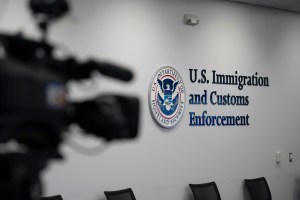