Google’s public sector business arm Tuesday announced it would offer continuity-of-operations services for government entities that are hit with a cyberattack while using a competing technology company’s tools.

Google will offer its Workspace collection of cloud computing tools for government agencies to deploy when breaches or attacks occur.

“This product is driven by past hacks and attacks on the government like SolarWinds and others that could occur again in the future. The government’s dependency on one software or set of tools could lead to a single point of failure and so they need to make sure they have backup plans in place,” Google Cloud Director of Risk and Compliance Jeanette Manfra told FedScoop.

She added: “We’re offering a new solution for those who want to have a backup plan if they get attacked and can’t use Office 365 or whatever software they’re using at the time. If you can’t trust your email because it’s been hacked or compromised then Workspace is ready for them – fully provisioned in advance.”

Microsoft was one of the major entities that was compromised by the massive Solarwinds cyberattack by Russian hackers in 2020.

Microsoft, which according to industry estimates holds about 85% of the market share of the federal government’s productivity and collaboration software, is expected to be the biggest player in the industry that Google’s new offering would be a backup for.

Google Public said in a statement that offering federal, state, and local agencies continuous access to email, chat, and videoconferencing systems “throughout a catastrophic situation is a top priority” for the company, especially since its invested in FedRAMP High and Department of Defense Impact Level 4 certifications which can give “federal agencies peace of mind.”

As a part of the federal government’s Presidential Policy Directive 40, which advocates that critical services are sustained in the event of an emergency—such as a natural disaster, a pandemic like COVID-19, or a major cybersecurity or ransomware attack—every U.S. government agency is expected to have a Continuity of Operations Plan (COOP) in place. More recently, Cybersecurity & Infrastructure Security Agency (CISA) also emphasized the need for COOP in its incident response playbook to strengthen cybersecurity for federal and civilian agencies.

Manfra said the new Workspace offering was starting to roll out to a few local and state governments but didn’t specify the expected size and scale of the initiative in the coming months. 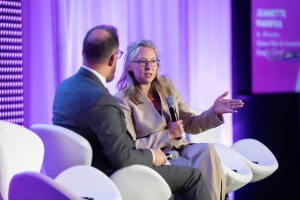