The Biden administration’s proposals for federal government spending represent a “common-sense” investment in U.S. physical and digital infrastructure, according to the administrator of the General Services Administration.

Following the release of the White House’s spending plan on Monday, Robin Carnahan praised the White House for proposing key investments in digital services as part of its fiscal 2023 budget request.

“These are common-sense investments in our nation’s physical and digital infrastructure that will improve governmentwide digital services and cyber defenses, strengthen American leadership on clean energy, and make critical upgrades to our public buildings,” she said in a statement.

Carnahan added: “The president’s budget reaffirms the Biden-Harris administration’s commitment to providing outstanding service to the public by improving how government delivers digital services and ensuring a sustainable and cost-effective federal real estate footprint for our federal customers.”

Carnahan further highlighted the $115.8 million proposed for FCSF, up from an estimated $55 million in fiscal 2022, which is managed by Technology Transformation Services. Presidential Innovation Fellows would be able to serve agencies more quickly and flexibly alongside the U.S. Digital Corps with that money, she said.

What’s more, cloud service provider participation in an increasingly automated Federal Risk and Authorization Management Program would reach new highs, and USA.gov would become the digital “front door” to streamlined government services and programs that GSA wants it to be, Carnahan added. 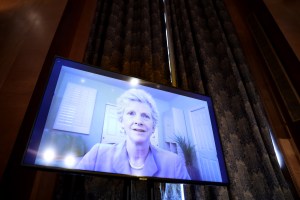