General Services Administration chief Robin Carnahan recently convened a group discussion with the majority leader of the House of Representatives to discuss ongoing funding of the Technology Modernization Fund.

The meeting on Jul. 27 with Rep. Steny Hoyer, D-Md., and other House members is understood to have focused on how to support and expand the work of the fund. TMF Executive Director Raylene Yung and Department of Veterans Affairs CIO Kurt Delbene also attended the meeting.

It came shortly before Senate lawmakers last week removed future funding for the TMF from a draft fiscal 2023 appropriations bill.

The appetite for TMF funding remains strong in the House, according to sources, and funding provisions are likely to be included in budget proposals from the chamber in the coming months.

“TMF funding remains a top priority for leader Hoyer, and I can’t see a situation in which House lawmakers would accept zero funding for TMF,” said one legislative source.

However, lawmakers in the Senate have previously expressed concerns over the allocation of extra public money to the fund without clear results and data demonstrating project outputs from the fund.

The TMF was capitalized with $1 billion in the American Rescue Plan last year, which the fund’s board intends to spend by the end of the calendar year. So far, it has invested over $500 million in federal agency IT modernization projects.

three new investments, the TMF has well over half a billion dollars now invested. The TMF aims to allocate all of the funds provided for the American Rescue Plan this year.

House appropriators in June included $100 million for the TMF in draft budget legislation for the 2023 fiscal year. This followed a request in March from the Biden administration for the fund to be topped up with an additional $300 million.

Commenting on the meeting, Rep. Hoyer said: “I appreciated the opportunity to sit down with members and with Administrator Carnahan to strategize on how best to provide the TMF with additional capital so that this innovative, revolving fund can support more modernization projects across the federal government.”

He added:  “I am disappointed that the Senate FSGG Appropriations bill has once again neglected to fund the TMF, despite the TMF receiving $100 million in the House FSGG bill. The TMF has a proven track record of upgrading mission critical systems across many agencies, and has bicameral and bipartisan support. I remain committed to ensuring TMF funding is included in the final appropriations legislation.”

Editor’s note: This story was updated to include additional comment from Rep. Hoyer. 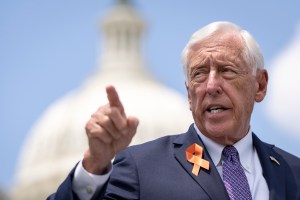