The Department of Defense is extending its outreach to academia for help with developing hypersonic weapons technology, announcing on Thursday several new applied research awards for work on navigation systems, scramjets, velocity and altitude controls, and capabilities for monitoring aeroshells.

Hypersonic missiles, which are designed to fly faster than Mach 5 and be highly maneuverable, are a top modernization priority for the Pentagon as it races with China and Russia to field new military tech. The DOD wants to refine and further develop the different components of hypersonics as it aims to begin fielding such systems in 2023 and bring additional platforms online in the next few years. It is also trying to build up the talent pipeline in academia and strengthen the future hypersonics workforce.

Four groups of universities and their research partners each recently received one-year, $500,000 awards for applied research to aid these efforts, the Pentagon said Thursday.

Texas A&M University, Pennsylvania State University, the University of Michigan and Ohio State University — in partnership with Sandia National Laboratories and the Boeing Co. — have been tapped to develop navigation systems to maintain the stability of the feedback control system for hypersonic vehicles.

“Researchers will apply multiphysics modeling approaches to identify and characterize drift of navigation sensors operating in degraded environments. The combined developments will create the Rate-Limited Information-Fusion, Learning, and Estimation System (RIFLES), which will advance the state of practice in robust navigation and information fusion,” according to a DOD press release.

The University of Virginia, University of South Wales, Ohio State University and the University of Arizona — in partnership with the Air Force Research Laboratory, FGC Plasma Solutions and Lockheed Martin — have been tasked with developing a scramjet system improvement that officials hope will enable hypersonic vehicles to operate across a broad range of flight conditions.

“Researchers will investigate the parameters that enable nanosecond discharge to enhance ignition and stabilize flameholding over a higher Mach number range,” the release said.

The University of Alabama in Huntsville and the CFD Research Corp. have been selected to design and develop novel concepts and technologies to enable hypersonic vehicles to achieve “precise velocities and altitudes” for various missions. Their work will include investigating “active burn-rate control of propellant grains to develop a control mechanism tailored to the propellant composition to support different mission requirements,” per the release.

Florida International University and the University of Rhode Island — in partnership with the Raytheon Technologies Research Center — are to come up with a solution for monitoring the health and status of hypersonic aeroshells.

“Researchers will analyze the inverse relationship between the presence of mechanical defects in the aeroshell and the rapid onset of heating due to those defects,” according to the release.

The research awards are being managed by the University Consortium for Applied Hypersonics and the Pentagon’s Joint Hypersonics Transition Office.

The Joint Hypersonics Transition Office, which falls under the Office of the Undersecretary of Defense for Research and Engineering, was stood up in 2020 and tasked with accelerating technology and workforce development and facilitating the transition of new tech into operational capabilities.

Thursday’s announcement came on the same day that Deputy Defense Secretary Kathleen Hicks visited Purdue University’s Hypersonics and Applied Research Facility to highlight the importance of these types of capabilities and the work that academia is doing to advance them. 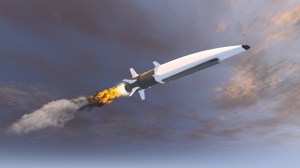