ICE is the third Department of Homeland Security agency to consider body-worn cameras, after Customs and Border Protection deployed them at select border crossings and the Secret Service put out a request for information for them earlier this year.

“The body worn camera pilot is an effort to increase transparency between ICE and the communities we serve, enhance officer safety and deliver on our commitment to accountability,” said Acting ICE Director Tae Johnson. “Safety of both ICE personnel and the public are the primary consideration when implementing these new technologies and tools.”

SWAT teams will participate in the pilot’s HSI phase, with participants receiving training on camera use and data uploads.

The cameras will be used in at-large arrests, warranted searches and questioning of people encountered in the field. Footage may be used to assess officer conduct in use-of-force incidents and for training and performance assessments.

Negotiations with the ERO union must conclude before that phase of the pilot can commence.

Federal use of the technology increased following the Department of Justice’s decision to permit use on federal task forces in 2020. 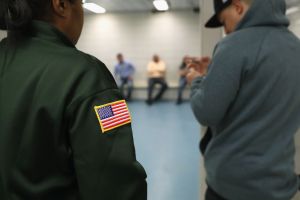