At some point during the move to mass telework across the military, the Army could conceivably become the biggest global user of Microsoft‘s Teams collaboration tool.

The service’s CIO Lt. Gen. Bruce Crawford told FedScoop that more than 300,000 soldiers are currently using Teams through the Department of Defense‘s Commercial Virtual Remote platform, which is based on the Microsoft application. And in the next 30 days, that number is likely to climb to more than 400,000 as the coronavirus pandemic continues to keep people home, he said in an exclusive videoconference interview with FedScoop.

“At some point, you’ve got to look at the Army and say, ‘Wow, as the largest service, the Army potentially could be the biggest user of this particular capability globally,'” Crawford said.

More impressive than the number of users, perhaps, is the speed at which the Army adopted enterprise collaboration tools in the early days of the pandemic. Crawford looked at this as a positive outcome of an otherwise bleak time across the nation.

“I think the COVID-19 environment actually created some opportunities to accelerate some of the ideas that we had and to rapidly accelerate the rollout of capabilities,” he said, calling the pandemic the “new normal” or the “new now.”

Crawford emphasized the Army’s “flexibility to be able to expand that quickly” as a major outcome during the early days of the pandemic and one that will endure. Across the Army, there’s long been an awareness of technology and what it can do for the service’s mission, he said. “But the ability to rapidly apply that technology — who knew three-and-a-half months ago the power of a capability like [Microsoft] Teams or a capability like WebEx or some of the other collaboration tools?”

“One of the big takeaways for me back to the importance of collaboration tools … there is no substitute for the ability to look in the eyes of those you lead,” he said.

This ability to rapidly adapt and innovate drove important outcomes with other Army tech capabilities as well.  For instance, Training and Doctrine Command — the Army’s training, recruiting and education organization — was “able to rapidly transition from in-person training and in-person recruiting to be able to tap into the virtual world and the virtual capabilities … to rapidly pivot to leveraging online training to continue the mission,” Crawford said.

“They were able to leverage the enterprise network rapidly to quickly innovate and quickly adapt and they have not missed a beat,” he said.

And almost overnight, the Army was able to scale its cybersecurity and network capacities as soldiers shifted to staying safe while working remotely.

On the network side, the service saw a 400% increase in network capacity in about 30 days to support remote capabilities, he said.

These last 90 days “were different than anything we’ve ever done,” Crawford said, and he believes the lessons learned during that time will endure.

Watch the full interview above to hear more about the Army’s IT evolution during COVID-19 and the other priorities Crawford has on tap, including the development of the Enterprise Cloud Management Office, the move to enterprise IT as a service and a brand new workforce training and skills development strategy. 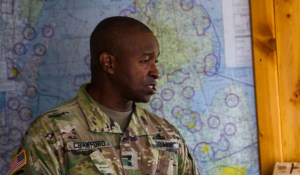 Inside the Army’s rapid IT response to COVID-19, with Lt. Gen. Bruce Crawford