Barrett takes over for Lt. Gen. Stephen Fogarty, who is retiring from the military.

Barrett is the first woman to head ARCYBER, and she takes the reins at a pivotal time for the command and the Army writ large, as they look to transition and formalize the doctrine of information advantage.

Barrett takes over as the Army’s Training and Doctrine Command is working to finalize the doctrine. In 2019, Fogarty outlined a vision for information warfare or an information warfare command, describing the need to integrate capabilities such as cyber, electronic warfare and information operations to provide commanders a significant advantage.

In the years since, the Army has settled on information advantage, which seeks to ultimately provide commanders with decision dominance to better sense, understand, decide and act faster.

Part of the reason for the change was to make it easier to work with the commercial sector and foreign governments.

“‘Hey, we’re the guys from information warfare’ — that may create some challenges. That’s very different than, ‘Hey, we’re the guy from information advantage,’” Fogarty told FedScoop in an April 29 interview prior to his retirement. “That wasn’t the overriding reason, but I think when we start looking at names and things like that, that makes it a little easier for us, particularly when we’re not in an Army type of situation.”

As part of the broader information advantage transformation, ARCYBER has created and will continue to develop new units to help it achieve a leg up relative to its adversaries in the information space.

These include the 915th Cyber Warfare Battalion. This first of its kind unit will consist of a total of 12 expeditionary cyber and electromagnetic activities teams (ECTs) by 2026 that will each be tailorable and aligned to specific geographic theaters to support commanders objectives in the tactical space as opposed to the more remote operations conducted by U.S. Cyber Command.

Currently, there are three companies within the battalion with two ECTs under a separate company, consisting of a total of over 200 personnel. The third ECT is slated to be created at the end of fiscal 2022.

Others new units include the Cyber Military Intelligence Group, which will blend military intelligence activities with commercial data and public information to support cyber operations, and the 60th Offensive Cyberspace Operations Signal Battalion, which will install, operate, maintain, and defend critical infrastructure and supporting networks while supporting Cyber Command.

During the ceremony Tuesday, Gen. Paul Nakasone, commander of Cyber Command and director of the National Security Agency, said Fogarty’s tenure as commander of ARCYBER “marks an inflection point in the history of this unit.”

During Fogarty’s time in command, ARCYBER saw its 41 cyber mission force teams — the offensive, defensive and support teams that feed up to Cyber Command — reach full operational capability; the transition of ARCYBER from Fort Belvoir, Virginia to Fort Gordon; and the beginning stages of electronic warfare being folded into the cyber branch and the creation of the 915th Cyber Warfare Battalion, which will help plan and conduct tactical cyber, electronic warfare and information operations for commanders with deployed forces.

Fortitude Hall, which is co-located with NSA’s Georgia facility, includes the Information Warfare Operations Center, which will provide an unprecedented real-time ability to sense and understand the global information environment.

This operations center will integrate traditional forms of military intelligence with feeds and broadcasts from commercial sources, displaying and fusing vast arrays of information in different ways.

The creation of Fortitude Hall and the new operations center has also allowed ARCYBER at Fort Gordon to take a more direct role in offensive operations and influence as it has been able to offload much of the missions to operate and defend the network to a subordinate unit, Network Enterprise Command, which is where Barrett most recently commanded.

In a question and answer interview for the Army, Barrett said one of the most memorable parts of her tenure at NETCOM was the transition of responsibility of the Army’s Department of Defense Information Network-operations to NETCOM.

“Our ability to provide scope and scale for secure and operate activities I believe significantly enhanced ARCYBER’s defend mission, particularly when critical vulnerabilities emerged that needed to be addressed quickly across all the Army’s networks,” she said. 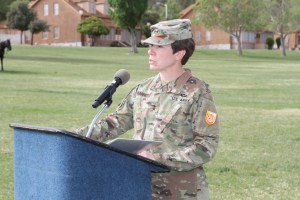