Palantir recently won a $110 million prototype contract to support a massive integration of data among the Army’s far-reaching and disparate systems.

It’s not a big dollar figure, as far as defense contracts go, but officials at the company and the service say it’s the start of work that will transform the way the Army thinks about, integrates and uses its data.

The Silicon Valley data analytics software company will support Army’s Vantage program, formerly known as the Army Leader Dashboard — an ambitious attempt to bring more visibility to the service’s data — unclassified and classified, structured and unstructured — through an integration, analytics and visualization platform. The four-year acquisition could be worth more than $400 million in total.

“The problem for Army’s leaders and commanders at every level is you’re trying to make decisions off of accurate data but the data is stored in so many places, it’s often very hard to figure out what’s going on,” Philippone said.

As the Army tries to move into the digital age, it hopes the program will weave all of this data together and “present information in a way that is immediately understandable and actionable for an everyday end-user,” according to an early solicitation document.

“Every command is pulling from similar datasets, but data has a ‘date/time’ stamp for truth,” Lt. Col. Rob Wolfe, Strategic Initiatives Group director and the lead for the dashboard project, said in a release from the Army earlier this year. “If we get to the point where we’ve successfully gotten all this data together and curated it so it’s trustable and reliable and timely, then anybody else who has a dashboard can leverage [Vantage] as their source of data. Then our leaders can talk apples-to-apples. We have to have one version of the truth for data.”

Palantir was one of five companies selected to create prototypes for Vantage, which was procured through what Philippone called a “rigorous” other transaction agreement (OTA). The other companies that competed were Microsoft, Accenture, Deloitte and Ernst & Young.

The OTA authority, which has existed for decades but was expanded in the 2016 National Defense Authorization Act, allows DOD to grant relatively small contracts for the development of prototypes and then follow on with an additional contract for production if and when the pilot is successful. This particular contract, however, was a bit of a nontraditional OTA in that it took more than a year to field a final prototype.

Now, Palantir’s work is underway, and Philippone confirms it is indeed “a massive data integration project.”

“What we did was integrate thousands and thousands of different data tables together so that you can make better decisions,” he said. “Just if you look at personnel, there’s something like 192 different systems that literally have thousands of tables inside of them where each table has up to 5 million rows. This is a very complicated data integration problem.”

The Army believes this program could revolutionize the way it approaches its data, Chérie Smith, program executive officer for enterprise information systems, said in July. “We have been focused for 20 or 30 years on transactions, and I think we’re going to start really, truly making that leap to focusing on the data and the information.”

This week, Palantir also made news by securing a Federal Risk and Authorization Management Program (FedRAMP) Moderate authorization. The new certification is “critical” to the company’s “fast-growing” work at civilian agencies, it said. 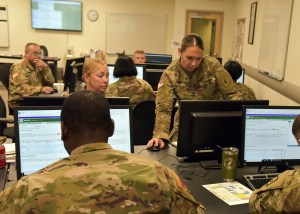 Inside Palantir’s support of the Army’s massive data problem