Intelligence agencies often stake their reputations on collecting and sharing classified information. But it’s the “explosion in publicly available information” of late that has caught the attention of John Sherman, the intelligence community’s CIO.

This boom in unclassified data “can greatly enhance our intelligence, law enforcement and other national security missions,” Sherman said during a panel Wednesday at the 2018 Digital Transformation Summit presented by Dell Technologies and produced by FedScoop. “Integrating it with our other classification layers can bring [artificial intelligence] and [machine learning] and all these other capabilities to bear.”

Information classified Secret and Top Secret tends to be the driving focus of the Intelligence Community IT Enterprise (ICITE), the centralized, cloud-based strategy for intelligence sharing among the 17 intelligence agencies. “We’ve been heavily focused on the Top Secret side as part of ICITE,” Sherman said. But, “I know full and well that more and more of the data we need for our intelligence community mission may very well either not be classified, be publicly available, or be at the secret level. And we have to be able to work across all of that.”

Though that information may be less sensitive in nature, it isn’t any less important to the intelligence and national security mission. And Sherman considers making it easy to access and share through good tagging practices and standards “really existential to why my job exists and why the Office of the Director of National Intelligence exists.”

After all, something basic “like cataloging all the many data sets we have” across the IC could be the difference in connecting the dots to prevent a major attack on the United States.

“If I have anything to say about it, we’re not going to have another 9/11 because there was a data set and somebody needed to see it, that a well-meaning analyst or collector had that could’ve been that missing piece of the puzzle,” he said.

Scott Bean, assistant director of the FBI’s IT Infrastructure Division, argued that the IC could be doing a better job making all intelligence data more shareable and accessible.

“We all lived through 9/11, and we all lived through the criticism that we got after 9/11 about not connecting dots,” Bean said. “Well if you think about what our collections looked like in 2001 [compared] to where we are today, we’re orders of magnitude collecting more data across the entirety of our mission space than ever before. And we’re still applying the same tools and techniques that we used and developed prior to and immediately following 9/11. And those tools and techniques are just not getting us where we need to be.”

“There’s a lot of pick and shovel work we have to do across the interagency,” Sherman said, later adding, “It’s both a challenge and an incredible opportunity.” 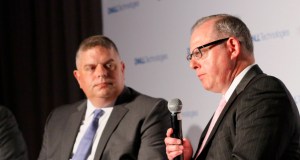