Federal agencies face a growing challenge as they try to rationalize their applications: how to capitalize on the potential of the cloud when their IT infrastructure increasingly exists in a dual world of on-premise and cloud environments.

What’s needed, say IT experts, is a modern and secure application platform that lays across agency networks and makes it feasible to take fuller advantage of cloud’s benefits, regardless of where an agency’s applications reside. 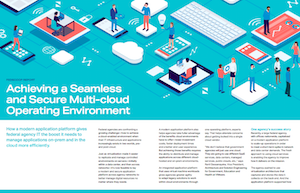 Dassanayaka shares how the modern application platform uses virtual machine workloads to integrate and adapt legacy solutions to work within cloud environments through one operating platform, in a new report, produced by FedScoop and underwritten by VMware.

“We don’t believe that government agencies will just use one cloud. They are going to use different SaaS services, data centers, managed services, public clouds, et cetera,” Dassanayaka says in the report, which was produced by FedScoop and underwritten by VMware.

The report outlines how integrating IT operations and cloud management through a modern application platform gives agencies a powerful opportunity to simplify infrastructure that has been built out over decades, while adhering to the White House Administration’s Cloud Smart strategy.

It cites the success of one federal agency that used the VMware Cloud Foundation solution to roll out and configure mobile devices to its field workers nationally.

“When their field workers across the nation receive their mobile devices, they are able to self-provision in five minutes will all of the native security features pushed down from [agency headquarters],” says Imran Abbas, director for solution engineering, federal civilian and health care at VMware.

“The application platform provides a single place for the management of these devices from a central IT perspective. If there is a situation where that device gets lost, it can be remote-wiped quickly and the threat is remediated in real time,” he explains.

The virtualization technology behind the platform provides and integration capability across multiple cloud-service providers, like AWS GovCloud or Microsoft Azure, all while using the same familiar architecture both on-premises and in the cloud.

This platform approach streamlines the ability to move applications from one environment to another, without having to undertake a lot of added time and resources to refactor the apps with every migration.

The report shares how a flexible, hybrid approach enables agencies to migrate applications and take advantage of cloud efficiencies as they arise, while seamlessly maintaining on-premises infrastructure where necessary — to reduce the workloads associated with refactoring disparate systems, applications and computing environments to mitigate security risks.

“In the defense-intelligence space … the deployment model has been reduced from years, to months, and now a week. You see mission tempo, mission success and the sense of urgency to modernize really pick up tremendously” as a result, says Rob Riegle, senior director for solution engineering for the Department of Defense at VMware.

The cloud is at its best when siloes are eliminated. Because VMware Cloud Foundation enables converged performance inside the software-defined data center — while also bringing storage, compute and network together in a building block modularity — agency services are easier to build, run, extend and secure.

Learn more about how VMware’s Cloud Foundation can help your agency manage your applications more efficiently on-premise and in the cloud.

This article was produced by FedScoop and sponsored by VMware. 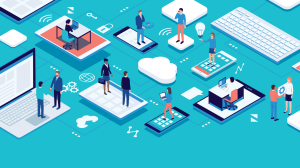 Bridging legacy and cloud IT into one operating environment