When President Donald Trump signed the Consolidated Appropriations Act of 2018 into law, he put a legislative mandate behind a decades-old transparency initiative. Buried in the bill’s 2,232 pages is a section that directs the Library of Congress to build and maintain a new website — a public-facing home for the taxpayer-funded reports written by the Congressional Research Service.

In response, the library has crafted a plan for development, a schedule for deployment and an estimated price tag for the build. Fans of the CRS’s work, however, are wondering whether it’s all worth it.

The Congressional Research Service has been called “Congress’ think tank” — it’s a public policy research group within the Library of Congress that churns out thousands of nonpartisan reports a year on issues as varied as U.S. policy in Kuwait, next generation 911 technologies and violent crime in American cities, to name just a few. Congress, however, has been keeping the reports out of the hands of most regular citizens, initially by arguing that the cost for reproducing copies would be too high, since 1954.

On Sept. 18, if all goes according to plan, that will change. The CRS’s non-confidential “R” series reports — which currently circulate to the public only if someone in a congressional office shares them — will be officially available to more than just lawmakers and aides for the first time.

According to the library’s website implementation plan, which was obtained by FedScoop, the new site will publish the reports in PDF format with a digital signature to ensure data integrity and will keep a version history as reports are updated. At launch, the library estimates that 500 of the approximately 2,700 active R-series reports will be available to read and download, and staff will continue to add new reports to the site “as soon as is practicable.” The whole thing will cost the library’s Office of the CIO about $1.5 million — most of that in labor costs.

Much of the work hinges on a modification that is being made to the CRS’s backend publishing system, known as the Authoring and Publishing (A&P) Tool. Library developers are building in an option that will allow A&P to send reports to both the internal congressional site, CRS.gov,  and the new public-facing one.

The public-facing website will have the “same look and feel” as CRS.gov, John Rutledge, the library’s customer engagement director, told FedScoop. This not only will save time and money for the library, Rutledge argued, it also means that the new site will be intuitive for the congressional staffers who might need to use it in a pinch.

So what’s the problem?

Daniel Schuman is the policy director at Demand Progress, a transparency organization that runs a site called EveryCRSReport.com, currently home to nearly 14,500 of the agency’s reports. Schuman is concerned that the library’s planned website does not meet the requirements of the law, will lack functionality and is too expensive.

The EveryCRSReport.com site, Schuman told FedScoop, cost less than $20,000 to build and maintain and has much of the same functionality that the LOC is looking for (like redactions of author contact information). What’s more, the website’s code is available, open source and free to use, on GitHub.

But Schuman’s concerns don’t end at cost. In a formal written response to the library’s implementation plan, a copy of which was obtained by FedScoop, Schuman and two other observers lay out additional critiques. Joshua Tauberer of GovTrack.us, a transparency initiative tracking legislative activities on the Hill, and Kevin Kosar from the R Street Institute, a free-market public policy think tank, joined him in the letter.

The library should commit to publishing more than just the R-series — insights, infographics, testimony and more should also be included on the site, the group wrote. Additionally, the library should publish reports in HTML as well as PDF format, and look into automatic processing to speed up the work of transitioning reports from CRS.gov to the public site at Congress.gov/crsreports.

Above all, Schuman argues, the LOC could be doing a better job of leveraging outside expertise. After all, a number of civil society groups, including his own, are already doing this work. “We’d be more than happy to chat with [the library],” Schuman told FedScoop. “We’ve tried.”

“My goal is not to stick it to them,” he said. He truly wants the project to be a success, he argued. “My real concern is that they’re not going to accomplish this by the end of this Congress… and then it will lose steam.”

‘It has become almost redundant’

Steven Aftergood, director of the Federation of American Scientists, doesn’t think the cost of the website is such a red flag. “It’s not a shockingly high cost, as far as I can tell,” he told FedScoop.

What worries him is the potential redundancy — most non-confidential CRS reports are already in the public domain if you know where to find them. Groups like the American Library Association have advocated for around 20 years to give the public easy access, and players like EveryCRSReport.com have stepped in to fill the void in the interim.

So while the library’s website will be new, it won’t exactly be novel.

“I feel a little puzzled that it took such a long time to accomplish this move,” Aftergood said. “You could even say that it is taking place at a time when it has become almost redundant.”

“The net increase in ‘transparency’ resulting from the new legislation is less than it would have been years ago,” Aftergood wrote in a blog post about the news. This isn’t to say that Aftergood thinks the forthcoming LOC site is a waste — it has the potential to grow and become more valuable, he said, especially if it expands beyond the R-series.

Both Aftergood and Schuman acknowledge that there is a value in finding CRS reports at a government domain. It’s an “implicit acknowledgment” by Congress that CRS reports should be public, and that’s new, Aftergood said.

“Congress is the authoritative source for this information,” Schuman said. “If Congress or the Library of Congress is the information publisher, then you know that what is being published is accurate, complete, authentic, and unaltered. Any secondary source (like us) means that you cannot have that level of assurance.”

At the end of the day, Schuman and Aftergood’s critiques boil down to a desire for the site to be as good as it possibly can be: more transparent, more user-friendly, less expensive. It’s a quintessential tension in civic tech — this isn’t the first time the dynamic has played out and it won’t be the last.

“I have no criticism of it,” Aftergood said. “I’m just sorry it took so long.” 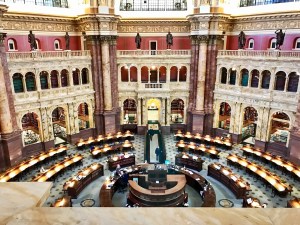 Library of Congress is spending $1.5M on a public Congressional Research Service reports website. Is it worth it?